Once again, the Russian disinformation excuse for leftist scandals has been revealed as a canard. And the trope had electoral implications as well.

Fox News host Jesse Watters asked Barr in a mid-March interview “Would you say that there was a conspiracy between Big Tech, former intelligence officials, the media, the Democrats to – I don't know, let’s just use the word – ‘rig’ an election?”

Barr did not mince words: “Yes, that’s, yes, definitely made an impact on the election, suppressing that news. And it’s not a question of whether it was criminal or not. Just the facts alone, uh, were shameful. And most Americans would immediately see what was going on and how repulsive it was, and it would’ve had an effect. The issue of criminality is a different issue.”

In another Fox News interview, Barr explained that he was “disturbed” during a presidential debate in 2020 how then-candidate “Biden lied to the American people” about the laptop story: "He’s squarely confronted with the laptop, and he suggested that it was Russian disinformation and pointed to the letter written by some intelligence people that was baseless—which he knew was, was a lie. And I was shocked by that."

He noted that the director of national intelligence and FBI both said there was no proof the laptop narrative was merely Russian disinformation. “[T]he media ignored it,” said Barr and went on to suggest instead that “when you’re talking about interference in an election, I can’t think of anything more than that kind of thing.”

The New York Post uncovered emails from a laptop indicating that then-candidate Joe Biden’s son, Hunter Biden, “pursued lucrative deals involving China’s largest private energy company — including one that he said would be ‘interesting for me and my family.’” The story dropped shortly before the 2020 election, and Twitter and Facebook both took action against the Post China bombshell much like they had for a similar Hunter Biden scandal involving dealings in Ukraine. Both Facebook and Twitter prevented users from being able to share the report of Biden’s Ukraine scandal. 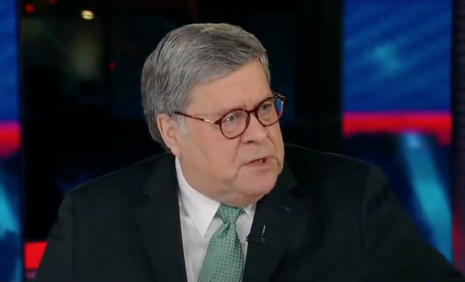 NewsBusters reported on previous McLaughlin & Associates research in late 2020 regarding Biden’s China scandal, which indicated that 36 percent of Biden voters were NOT aware of the evidence linking Joe Biden to corrupt financial dealings with China through his son Hunter. Thirteen percent of these voters (or 4.6 percent of Biden’s total vote) said that had they known these facts, they would not have voted for the former vice president.

This would have been enough to re-elect former President Donald Trump.

Conservatives are under attack. Contact your local representative and demand that Big Tech mirror the First Amendment while providing transparency, clarity on “hate speech” and equal footing for conservatives. If you have been censored, contact us at the Media Research Center contact form, and help us hold Big Tech accountable.