Podcaster Joe Rogan joined many of the internet’s biggest podcasters from Tim Pool to Michael Malice at a roundtable event. Rogan explained how he came to understand Big Tech is meddling in America’s electoral process.

The Joe Rogan Experience host Rogan, warned that Americans must confront Big Tech censorship and its impact on American politics “All these, like, internet companies, whether it's Google or whether it's Facebook or Instagram, if they can just censor you based on ideology then you don't have freedom of speech,” Rogan explained to a roomful of famous podcasters in a Nov. 17 Timcast IRL livestream. Rogan suggested Big Tech is functionally “some sort of utility” and cautioned: “when it’s literally one of the main two or three ways that human beings share ideas across the planet fucking earth, it’s bigger than just a company. And, and I don’t know what the solution to that is, but we have to have that conversation.”

Rogan also illustrated that Big Tech censors and the left are allied: “The way it censors is always in favor of the left, and the people on the left think that's a good idea, but eventually you can't be left enough. It’s just going to keep going. It’s going to— It’s a machine; it’s Pac-Man.” 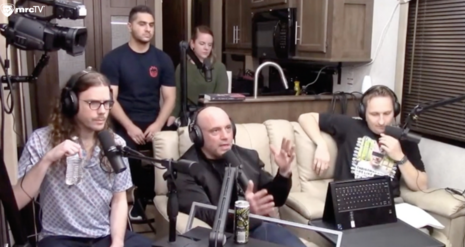 Rogan explained “a lot of things have opened my eyes” concerning the severity of Big Tech censorship. Rogan recounted how the censorship of evolutionary biologist Bret Weinstein’s Unity Party made him reevaluate Big Tech’s biases:

“You guys banned an account for no reason because you thought that that account, which was by a bunch of influential people, influential intellectuals was going to somehow or another take votes away from what you thought was the party that should win. And so you just ban the account. So then, you're making, like, these ideological choices about free speech. So, you’re saying, ‘Your free speech is not as important as the result that I want,’ and so, you’re going to ban people.”

The host of the roundtable, Tim Pool, observed that Rogan has specifically seen the light on Big Tech censorship for multiple reasons. “For one, like, Joe really started to understand and see what was going on as things got worse. But it’s also that things are getting worse. I want to make sure I preface that by saying that freedom-loving individuals, liberty-minded individuals, are winning many battles across the board, but on the censorship stuff, as this becomes the new corporate press, it is getting worse,” said Pool.

Pool added, “over time, they are homogenizing what YouTube is, and they want it to be that mainstream narrative.”

Conservatives are under attack. Contact your local representative and demand that Big Tech mirror the First Amendment while providing transparency, clarity on “hate speech” and equal footing for conservatives. If you have been censored, contact us at the Media Research Center contact form, and help us hold Big Tech accountable.