Senators met today for yet another bipartisan session of skewering Facebook and Instagram for controversies ranging from reportedly hiding harms to teenagers to double standards of censorship.

Senator Ted Cruz (R-TX), in particular, came out swinging. The Texan compared Facebook leadership to the lazy and willfully ignorant prison camp guard Sergeant Schultz from the Hogan’s Heroes sitcom set during World War II. “Facebook is in the process of hiding. Facebook is in the process of trying to avoid accountability,” Cruz explained. He then seemingly joked that a colleague of Davis, Facebook Vice President of Privacy & Public Policy Steve Satterfield from a prior hearing on Facebook’s conduct, “played the Sergeant Schultz game. Do you remember the old TV show ‘Hogan’s Heroes’? His testimony was essentially: ‘I hear nothing. I see nothing.’ And so, when it came to Facebook’s research concerning the incredible harm that Instagram is inflicting on young girls, your colleague, Mr. Satterfield said he didn't know anything about it, that he didn't cover those issues. He didn't know anything about it.”

Blumenthal roasted Facebook leadership for claiming to be transparent when the hearing was inspired by reportedly leaked documents from a whistleblower:

“You know that is perhaps one of the most discouraging parts of your testimony, that you’re relying on your past record of transparency for what you’ll do in the future. The fact of the matter is there are thousands of documents that we have only because a whistleblower has come forward, documents that show your own findings. That is directly the opposite of transparency, Ms. Davis.”

Senator Roger Wicker (R-MS) observed that Facebook’s mysterious moderation practices, on a wide range of issues, have kept the American people in the dark for too long:

“Today the content moderation and data collection practices of Big Tech remain largely hidden to consumers. Too often Americans are left wondering why their online posts have been deleted, demoted, demonetized or outright censored without a full explanation. Users also remain in the dark about what data is being collected about them, how it's being used and to whom it's being sold and for what purpose.”

Wicker brought his argument home by citing how “[r]ecent reports from The Wall Street Journal may have shed new light on why Facebook’s platform management practices have been kept from public view. This month, the journal revealed that Facebook's so-called cross check program reportedly exempts certain public figures from its terms of service and community standards.”

Scorching Facebook’s moderation practices has been a rare point of bipartisan agreement for American politicians since the previous hearing earlier in September, “Big Data, Big Questions: Implications for Competition and Consumers.” 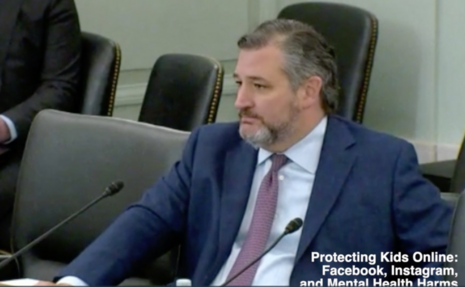 During the hearing, Blumenthal agreed with an earlier statement from Sen. Mike Lee (R-UT) comparing Big Tech to Big Tobacco:

“The comparison to Big Tobacco made by Senator Lee is entirely apt, and I know something about Big Tobacco because I sued Big Tobacco, and I remember the revelation of the documents that showed Big Tobacco not only knew, but had done experiments proving that cigarettes cause cancer. They had denied it for years. They had the knowledge about the damage done to people who smoke.”

Conservatives are under attack. Contact Facebook headquarters at 1-650-308-7300 and demand that Big Tech be held to account to mirror the First Amendment while providing transparency, clarity on “hate speech” and equal footing for conservatives.If you have been censored, contact us using CensorTrack’s contact form, and help us hold Big Tech accountable.