House Minority Leader Kevin McCarthy (R-CA) warned that "a Republican majority will not forget" Big Tech and telecommunication companies that “violate federal law” and surrender the information of private citizens in response to Democrat pressure.

The Democrat-led January 6th commission hit Big Tech with a giant fishing expedition for private private information, and conservatives have sounded the alarm. "Adam Schiff, Bennie Thompson, and Nancy Pelosi’s attempts to strong-arm private companies to turn over individuals’ private data would put every American with a phone or computer in the crosshairs of a surveillance state run by Democrat politicians,” McCarthy warned via Twitter on Aug. 31. “If these companies comply with the Democrat order to turn over private information, they are in violation of federal law and subject to losing their ability to operate in the United States.”

McCarthy suggested that there would be severe consequences for companies that enable a far-left surveillance state: “If companies still choose to violate federal law, a Republican majority will not forget and will stand with Americans to hold them fully accountable under the law." 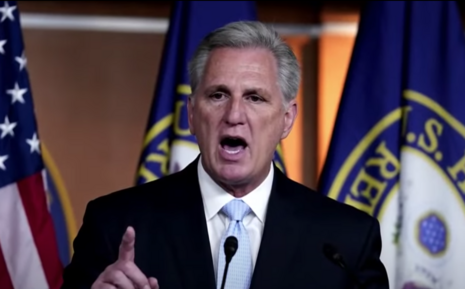 The absurdly named Select Committee to Investigate the January 6th Attack on the United States Capitol demanded that Big Tech help the government spy on the private information of American citizens.

The committee continued to push for private data of American citizens: “In letters to the companies, Chairman Thompson seeks information including records related to the spread of misinformation, efforts to overturn the 2020 election or prevent the certification of the results, domestic violent extremism, and foreign influence in the 2020 election.”

USA Today observed that some Republican leaders may be targeted by the demand for private information: “The Jan. 6 committee has not identified whose phone records it is seeking, but they could include McCarthy and Rep. Jim Jordan, R-Ohio, who spoke with former President Donald Trump on Jan. 6.”

USA Today also illustrated that the Democrat-majority committee has manipulated its membership: “Shortly before its first hearing, House Speaker Nancy Pelosi, D-Calif., denied two Republican nominations to the committee, Jordan and Rep. Jim Banks, R-Ind., over their votes to contest the 2020 election.”

Conservatives are under attack. Contact your local representative and demand that Big Tech mirror the First Amendment and abide federal law while providing transparency, giving weight to privacy concerns and supplying equal footing for conservatives. If you have been censored, contact us using CensorTrack’s contact form, and help us hold Big Tech accountable