The Biden administration “is ‘reviewing’ whether to try to alter Sec. 230 in order to tackle COVID-19 vaccine misinformation on social media sites like Facebook and Twitter,” Protocol reported July 20. Morning Joe host Mika Brzezinski asked a Biden official whether the administration is “open to amending [Section] 230” so Big Tech companies that help spread “false information” could be “held accountable,” “liable for publishing” so-called misinformation and “open to lawsuits.”

White House Communications Director Kate Bedingfield responded: “Well, we're reviewing that, and certainly they should be held accountable.” Bedingfield then pivoted and suggested that the real crisis facing the American republic is the existence of conservative news outlets:

It is also the responsibility of the people creating the content. And again, I would go back to, you know, there are conservative news outlets who are creating irresponsible content that’s sharing misinformation about the, about the virus that's getting shared on these platforms. So, it is a big and complicated ecosystem, and everybody bears responsibility to ensure that we are not providing people with bad information about a vaccine that will save their lives. 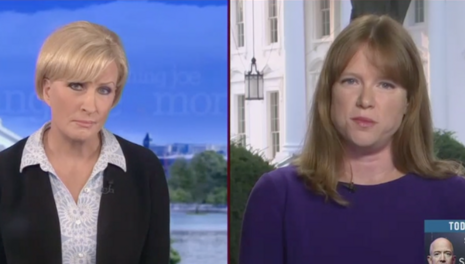 den has a history of attacking free speech on social media platforms. He previously slammed Section 230 in a January 2020 interview.
Then-Democratic primary frontrunner Joe Biden told The New York Times editorial board “that Section 230 should be revoked, immediately” for Big Tech companies. The Times called the provision “pretty foundational” to the internet.

Biden then suggested Section 230 was responsible for a multitude of problems:

That’s right. Exactly right. And it should be revoked. It should be revoked because it is not merely an internet company. It is propagating falsehoods they know to be false, and we should be setting standards not unlike the Europeans are doing relative to privacy. You guys still have editors. I’m sitting with them. Not a joke. There is no editorial impact at all on Facebook. None. None whatsoever. It’s irresponsible. It’s totally irresponsible.