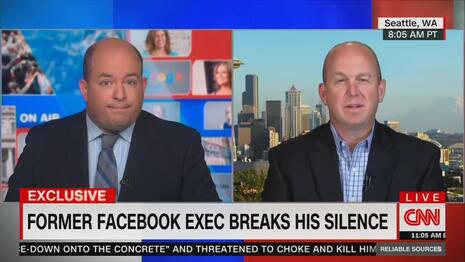 Former Facebook Vice President Brian Boland scolded his former employer for not being more censorious amid the COVID-19 pandemic.

The former Facebook executive made a July 18 appearance on CNN's Reliable Sources with Brian Stelter to rake his former workplace over the coals for not censoring enough. Stelter set the stage by warning viewers: “It's not hard to find anti-vaccination propaganda on the platform.” He alleged that “you'll see faces like Tucker Carlson; you’ll see Alex Jones of Infowars. You'll see an entire ecosystem of this content.” Boland agreed that Facebook hosts “misinformation,” whether it's “Tucker Carlson or Alex Jones or others or a broad array of people.”

Boland slimed Facebook for having a “let's avoid the story or let’s control the narrative” mindset and claimed: “It's one of the main reasons that I quit.” Stelter then asked: “Is Facebook a radicalization engine? Is it radicalizing millions of Americans?” Boland did not express certainty, but suggested: “A great way for us to understand that is to have more access to the data that will give researchers and journalists and teams the ability to do that hard work.”

Boland illustrated that while Facebook employees do not write so-called “misinformation,” the platform can be used to convey it:

Stelter pitched removing free speech in another part of the same episode as a means to saving America rather than a moral hazard: “This is a life and death matter, as Joe Biden and the White House are talking about on Friday in terms of Facebook. We are now in a life-and-death situation where accuracy in media really does matter now.”

“It's not about censorship. That’s what they’re going to say,” Stelter absurdly alleged. “It's about reality.”