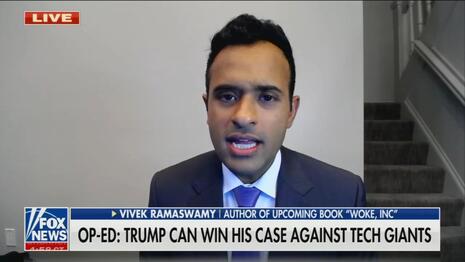 Many solutions have been proposed, but Philanthropy Roundtable board member Vivek Ramaswamy suggested what could be former President Donald Trump’s best path to victory over Big Tech tyranny in his lawsuit.

Ramaswamy illustrated that “there’s a strong case” that “social-media censorship violates the Constitution.” His opinion piece for The Wall Street Journal headlined “Trump Can Win His Case Against Tech Giants” explained: “If his lawyers do better in court than in their initial filing, Mr. Trump can win.” While stating that the First Amendment technically only applies when government action is involved, Ramaswamy suggested Big Tech has a history of working with the government: “Their censorship constitutes state action because the government granted them immunity from legal liability, threatened to punish them if they allow disfavored speech, and colluded with them in choosing targets for censorship.”

Ramaswamy reflected on when “Prominent congressional Democrats … issued severe, explicit and repeated threats to retaliate against social-media giants if they fail to remove ‘hate speech’ and ‘misinformation’ that the government can’t directly censor under the Constitution.” He then remarked that “[t]hese threats have worked.” He went into detail explaining the clear partnership that has existed between government and Big Tech:

Sen. Richard Blumenthal of Connecticut told CEOs Jack Dorsey of Twitter and Mark Zuckerberg of Facebook: “The president has used this microphone to spread vicious falsehoods and [sic] apparent attempt to overturn the will of the voters.” In the same hearing, he threatened “a breakup of the tech giants” and “Section 230 reform,” including ‘possible repeal.’ Mr. Zuckerberg has called such regulations an ‘existential threat’ to Facebook. In January both sites banned Mr. Trump.

Ramaswamy also noted that Big Tech at times works willingly with the government: “A growing body of evidence suggests that social media companies have voluntarily worked with Democratic officials to censor content the latter disfavor.” He recounted one case where “the high court held that state action exists if the private party’s conduct results from ‘significant encouragement, either overt or covert,’ or if the private party is a ‘willful participant in joint activity with the State or its agents.”

After citing seemingly clear judicial precedent, he recounted Facebook working with government: “In September 2020[,] Mr. Zuckerberg acknowledged that Facebook ‘works with’ the Centers for Disease Control and Prevention to remove Covid-related content.”

He also reminded readers of Facebook’s part in restricting the Wuhan lab-leak theory: “[W]hile officials including Anthony Fauci proclaimed that the Wuhan lab-leak theory was ‘debunked’ and a ‘conspiracy theory,’ Facebook blocked any mention of that theory as ‘misinformation.’” Ramaswamy suggested that while emails between “Zuckerberg and Dr. Fauci reveal no evidence of direct instruction from the government,” they do “make a case for Facebook’s willful participation in a joint activity with the government.”

Conservatives are under attack. Contact your local representative and demand Big Tech mirror the First Amendment: If you have been censored, contact us using CensorTrack’s contact form, and help us hold Big Tech accountable.