Associate Professor of Law at Columbia University Lina Khan was voted in by a bipartisan vote of 69-to-28 to join the Federal Trade Commission. Multiple Republicans appear unconvinced she is the right person for the job.

“By naming tech critic Lina Khan to chair the Federal Trade Commission Tuesday, the White House made clear it is dead serious about antitrust enforcement and other measures to rein in Google, Facebook, Apple and Amazon,” Axios reported June 16. The same outlet noted the gravity of such an appointment, because if a reckoning for Big Tech is possible, it will likely be from the Federal Trade Commission (FTC): “Specific moves to clip the wings of tech giants over issues like monopolistic behavior and privacy practices are more likely to come from leadership at the FTC and the Department of Justice than from Congress.” 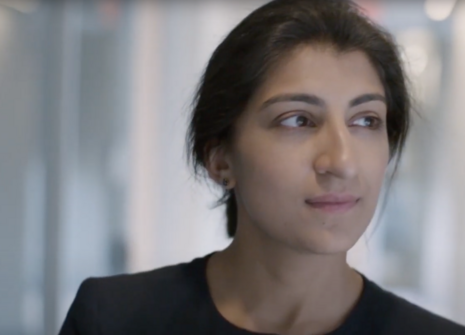 Her nomination received a bipartisan endorsement with a few notable exceptions, Politico reported in May:

“The panel agreed to move forward with Khan’s nomination by voice vote. Sens. Dan Sullivan of Alaska, Marsha Blackburn of Tennessee, Mike Lee of Utah and Cynthia Lummis of Wyoming, all Republicans, asked to be recorded as opposed to putting Khan on the FTC.”

Khan declared in a June 15 tweet that her confirmation will bring a shake-up to America’s Big Tech stalemate. “I’m so grateful to the Senate for my confirmation,” she said. “Congress created the FTC to safeguard fair competition and protect consumers, workers, and honest businesses from unfair & deceptive practices. I look forward to upholding this mission with vigor and serving the American public.”

Khan’s appointment to the chair of the FTC rather than being another member should not be overlooked. "The difference between being a mere commissioner and being chair is the difference between going to the moon and going to Mars," said former FTC Chairman William Kovacic, according to Axios. "Mars is a much bigger deal."

Left-wing outlet Vox Recode pointed out that at least one notable conservative appeared eager to work with Khan: “Khan seemed to be somewhat popular with conservatives, too, with Sen. Ted Cruz (R- TX) saying during her confirmation hearing, ‘I look forward to working with you.’” Cruz ultimately voted “Nay” on Khan’s nomination.

Many of the most far-left Democrats in office are in favor of Khan as well, which may leave conservatives concerned. Sen. Elizabeth Warren (D-MA) said Khan's appointment provides "’a huge opportunity to make big, structural change by reviving antitrust enforcement and fighting monopolies that threaten our economy, our society, and our democracy,’" according to Axios.