Tom Cotton Says Twitter Tried to Censor Him, Calls for ‘No Quarter’

Cotton wrote the now-infamous New York Times opinion piece headlined, “Tom Cotton: Send In the Troops,” calling to restore order amidst the George Floyd riots on June 3. Cotton later tweeted the phrase: “No quarter for insurrectionists, anarchists, rioters, and looters.” He asserted in a Fox News opinion piece that he was contacted “Within a few hours” by “a low-level employee in Twitter’s Washington office.” Cotton described a bizarre scenario that followed, in which he called the employee’s bluff and condemned the unchecked power of Big Tech to censor. 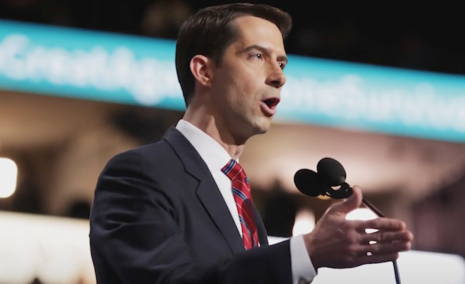 This employee reportedly “[claimed] that my tweet violated the company’s policies.” This same employee followed by issuing an “ultimatum,” which was “delete the tweet or Twitter would permanently lock my account” within a 30-minute window. Cotton stood strong and called her bluff.

He described the  clear hypocrisy on how liberals have suddenly feigned shock over his usage of the common phrase:

“Never mind that the phrase today is a common metaphor for a tough or merely unkind approach to a situation. For instance, former Democratic presidential candidate Pete Buttigieg and The New York Times have used the phrase in this way. Or that politics often employs the language of combat as metaphors: campaigns, battleground states, target races, air war and ground war, and so forth. And, of course, the exaggerated foolishness that I was literally calling for the arrest and summary execution of American citizens.”

Cotton explained how his aide who answered this Twitter employee’s call tried to negotiate first:

“My aide tried to reason with the employee. We offered to post a new tweet clarifying my meaning — which I did anyway — but the employee refused, insisting I had to delete the original tweet because some snowflakes had retweeted it.

Cotton suggested that it was beyond the shadow of a doubt “that this low-level employee was acting as a front for more senior officials at Twitter, whom one might expect would contact directly a sitting senator to discuss such a serious matter.” He also quipped that “It was equally clear that she avoided putting as much in writing as possible” because, naturally, “Accountability is not Twitter’s long suit, either.”

He explained how no punishment of his account ever materialized:

“I called Twitter’s bluff, and 30 minutes came and went. I retained control of my account. Finally, almost two hours after the initial contact, the employee called to say Twitter would take ‘no action’ against my account, but she was not authorized to say more.”

Cotton lamented how “Twitter began as an open platform committed to the free exchange of ideas,” but has since devolved into the “politically correct censor of thought-crime by elected officials and ordinary citizens alike.

“Not surprisingly,” Cotton continued, “the censorship falls overwhelmingly on conservatives.”

He slammed Twitter for claiming it restricts “threats of violence,” while in truth, it “won’t even cooperate with law enforcement investigating death threats against me and other legislators. And the orthodoxy starts at the top: CEO Jack Dorsey reportedly unfollowed the Twitter account of The New York Times Opinion section after it published my op-ed.”

He observed how “Many legislators want to limit or eliminate their liability protections under Section 230 of the Communications Decency Act.” Big Tech companies also face potential antitrust actions by the Department of Justice and state attorneys general.