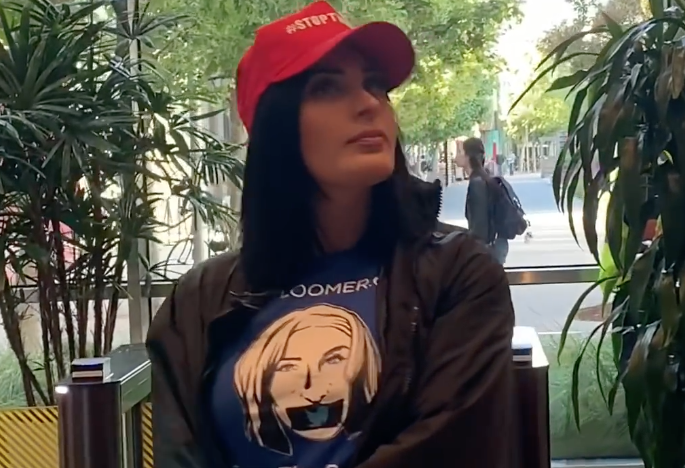 Recently deplatformed activist Laura Loomer showed up to Facebook’s lobby on May 3, skewering the company for showing solidarity for everybody but Jewish and Christian people.

A poster, possibly handmade by a local worker, hangs in the lobby right next to the entrance. It says

Loomer, Jewish herself, observes that these groups are pitted in opposition America’s Judeo-Christian founding culture. Even terms like “native,” when used in a social justice context, are exclusively used when advocating for non-European indigenous peoples.

“What about white people? What about Jews? What about Christians?” Loomer asks in her video, adding later that those who control Big Tech “just care about what the Left endorses.”

She elaborated further on what the modern left does fight for. She claims that “What the left represents in this country right now is an anti-American, anti-White, anti-Jewish, anti-Christian, pro-Sharia agenda. And their signs are clearly representative of this.”

After police escorted her out of the building, she compared the power of Big Tech to the state in George Orwell’s 1984. She lamented that tech companies are so free to deplatform that “they can now decide whether or not somebody exists.”

Facebook, like many other big tech companies, is famous for a left-wing political monoculture. Employees panicked over their Vice President of Global Public Policy Joel Kaplan’s support of Brett Kavanaugh. Facebook has experimented with rainbow flag filters and emojis for years, but their CEO and CFO decided then to express "frustration that Kaplan had inserted the company into the political moment,” according to NBC.

In August 2018, a Facebook engineer Brian Amerige wrote that fellow Facebook employees are “quick to attack -- often in mobs -- anyone who presents a view that appears to be in opposition to left-leaning ideology.”