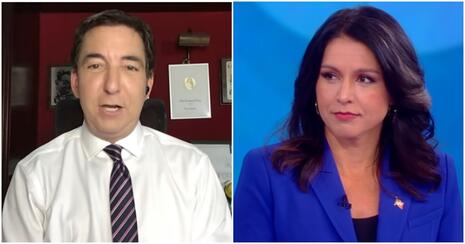 Gabbard is a former Democrat member of Congress who ran against now-President Joe Biden for the Democratic Party presidential nomination in 2020. Greenwald is an investigative journalist who previously worked for left-of-center outlets including The Guardian, and is well known for breaking a story that uncovered the U.S. National Security Agency was collecting the telephone records of tens-of-millions Americans. Mesrobian and Jilani both have written for progressive media outlets.

Rumble’s primary audience has been users considered right wing, but the platform’s welcoming of a broader diversity of voices could bring even more growth.

“Conservatives are the ones going to new social media platforms right now because they’re being censored on Big Tech platforms, but that will probably change over time,” Media Research Center Vice President Dan Gainor told the Washington Examiner.

At least half of the new voices have experienced censorship personally, and most have expressed concern about it. “The goal is to forge independent spaces to liberate journalists and other content creators from the tyranny of Big Tech,” Greenwald said, according to Rumble’s press release announcing the move. “Many writers, from across the political spectrum, have been censored or excluded from mainstream platforms and Rumble gives these voices a chance to express themselves without having to worry about baseless attacks by the government or other self-appointed gatekeepers.”

The move to Rumble is a useful counterweight to left-wing social media. Media Research Center founder and President L. Brent Bozell argued Big Tech holds a “monopolistic grip over speech to silence conservatives.” He continued: “[I]t is ever more important to adopt and support social media platforms that defend our freedom of speech. Starting now, you can find MRC’s video content on Rumble. Follow us and help us fight back against Silicon Valley’s leftist agenda!”