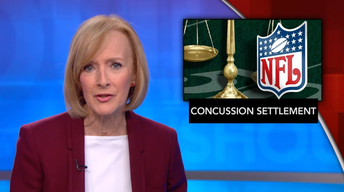 Liberals love science. Except when they come face-to-face with science that lacks a political agenda. That occurred this week when Judge Anita Brody handed down her ruling in the NFL’s concussion settlement that only deceased NFL players whose brains show evidence of CTE will automatically qualify for benefits from the fund. Not living retired players.

It was a victory for science over the supposedly science-loving media because it is a scientific fact, and for the media, an inconvenient truth, that CTE cannot currently be detected in a living person. In other words, you have to be dead in order to prove that you actually had CTE.

Makes sense, right? If the disease can only be detected in the deceased, then they should be the main target group for compensation. This decision became one of the rare moments in the NFL’s concussion/CTE debate where actual science prevailed over media-generated conventional wisdom.

It still didn’t stop Pro Football Talk’s Mike Florio from raising the Kraken of crazy. Florio protested Judge Brody’s ruling, on the grounds that “the settlement doesn’t feel appropriate or adequate. And no portion of the 132 pages devoted to the laborious task of justifying the settlement can reconcile the discrepancy between paying deceased players with CTE and not paying living players with CTE.”

The reconciliation is called science, Mike. Scientifically speaking, there is no such thing as a “living player with CTE.” If Florio concerned himself more with the science, and less with the politics, he would know that. Further, if he had read Judge Brody’s decision more carefully, he would have seen that even though there’s no way to diagnose CTE in the living, Brody still made compensation available to living players who show symptoms linked to CTE.

But that’s not as much fun for the media. The only way they will achieve their goal of eradicating the NFL is if they can get living players, who greatly outnumber the dead ones, compensated

As Daniel Flynn has pointed out in Breitbart, more stories have run in the New York Times about concussions and CTE than actual documented cases of concussions and CTE. Right now, according to Flynn’s research, the “Grey Lady” churns out four articles for every documented case of CTE. Put another way, the Times has written eleventy billion words on CTE for every one that they wrote about Benghazi.

Buried within Judge Brody’s ruling, is the scientific fact that no one really knows what the heck CTE is. “The study of CTE is nascent,” the judge wrote, “and the symptoms of the disease, if any, are unknown.”

Stop right there. This woman just awarded millions in compensation to players exhibiting “symptoms” of a disease that by her own admission are “unknown.”

“Beyond identifying the existence of abnormal tau protein in a person’s brain, researchers know very little about CTE,” Judge Brody added.  “They have not reliably determined which events make a person more likely to develop CTE . . .  More importantly, researchers have not determined what symptoms individuals with CTE typically suffer from while they are alive.”

“[R]esearchers do not know the symptoms someone with abnormal tau protein in his brain will suffer from during life,” she wrote.  “No diagnostic or clinical profile for CTE exists.”

So how does a disease, which may or may not be a disease, end up maybe or maybe not having symptoms that win its victims millions upon millions of dollars in compensation?

Fear. Fear created by four articles to every documented case, fear created by PBS specials, fear created by pleading with the “Mothers of America” to pull their sons out of Pop Warner, fear created by athlete suicides turned into something they’re not by an agenda driven media, and fear that creates the expectation of action, which is what Judge Brody gave them.

I’m not trying to make the deceased vs. living element of the Judge’s ruling into more than what it is. Clearly the anti-football media has made huge gains. But even when you’re losing the war, it’s nice to win a battle every now and again.