On Monday, ABC’s World News Tonight with David Muir and the CBS Evening News with Scott Pelley did their best to move on from the Obama administration’s decision to not have President Obama, Vice President Biden, Secretary of State John Kerry, or Attorney General Eric Holder attend the march against Islamic terrorism in Paris on Sunday that drew well over one million people.

All told, ABC ran only a 42-second segment on the White House’s response to the criticism on Monday and CBS had a news brief. Along with one tease on CBS, their coverage combined for a scant one minute and three seconds.

ABC’s David Muir stated that “the White House” was “under fire” and spent Monday “acknowledging they should have done more.” After playing a soundbite of chief White House correspondent Jonathan Karl asking White House Press Secretary Josh Earnest why no high-ranking government official was in attendance, part of Earnest’s response was shown and then the newscast moved on to weather.

CBS’s 17 second brief included Scott Pelley mentioning, in part, how “the Obama administration said it made a mistake by not sending a high-ranking official to yesterday's historic march in Paris.”

While ABC and NBC tried to sweep the story under the rug, the PBS NewsHour sought to defend the President from any criticism. Co-anchor Gwen Ifill complained how “the administration suffered withering criticism for failing to send anyone of higher rank.”

Correspondent Margaret Warner provided even more cover for the Obama administration when she said European officials “don't want to criticize the President” since the intelligence information that the U.S. has provided “is huge.” Werner brushed off those in Europe criticizing Obama as just “the tabloids in Britain,” including “the Daily Mail saying Obama snubs historic Paris rally.” To that point, Ifill lamented how there are “[t]abloids here as well” in the U.S.

In surprising contrast, NBC Nightly News offered the most network airtime on the no-show by the President as well as a report that was rather critical of the Obama administration’s move.

Anchor Brian Williams teased the two-minute-43-second segment by NBC News chief foreign affairs correspondent Andrea Mitchell (which led off the program) by remarking: “World leaders converge on Paris with millions of people in a show of solidarity against terrorism, but where was the American delegation from the President on down?”

Williams added in introducing Mitchell that “[m]issing from” the scene at “the largest crowd in the modern history of Paris” was none other than “the man so often referred to as the leader of the free world” in the President.

With the attendance of Israeli Prime Minister Benjamin Netanyahu and Palestinian leader Mahmoud Abbas, Mitchell reported that the march “was an event so powerful it united enemies,” but took place without Obama, Biden, or Kerry.

She added that U.S. Ambassador Jane Hartley was “[t]he highest ranking American official” there, but was “so far back you can barely pick her out of the crowd.” Mitchell went on to wonder why the President spent his Sunday in the White House, and Biden having no public schedule and at home in Delaware instead.

The relevant portion of the transcript from ABC’s World News Tonight with David Muir on January 12 is transcribed below. 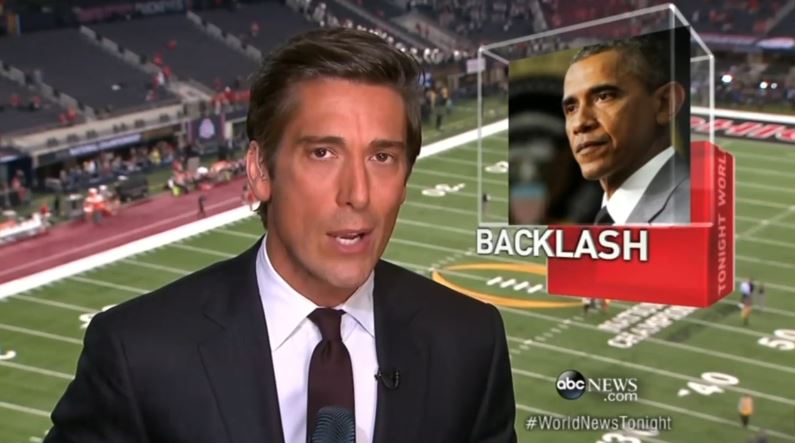 DAVID MUIR: Over the weekend, we know millions gathering in France, a show of unity, including more than 40 world leaders. French President Hollande, the German Chancellor Angela Merkel, arm in arm with dozens of leaders there. President Obama, Vice President Biden were not there and this evening, the White House under fire, acknowledging they should have done more. ABC's chief White House correspondent Jonathan Karl pressed the White House today and here's what they said.

JONATHAN KARL [to JOSH EARNEST]: You said, you should have sent somebody with a higher profile. Why?

WHITE HOUSE PRESS SECRETARY JOSH EARNEST: The American people stand shoulder to shoulder with our allies in France and sending a high level, highly visible senior administration official with a high profile to that march would have done that.

The news brief that aired on the CBS Evening News with Scott Pelley on January 12 can be found below. 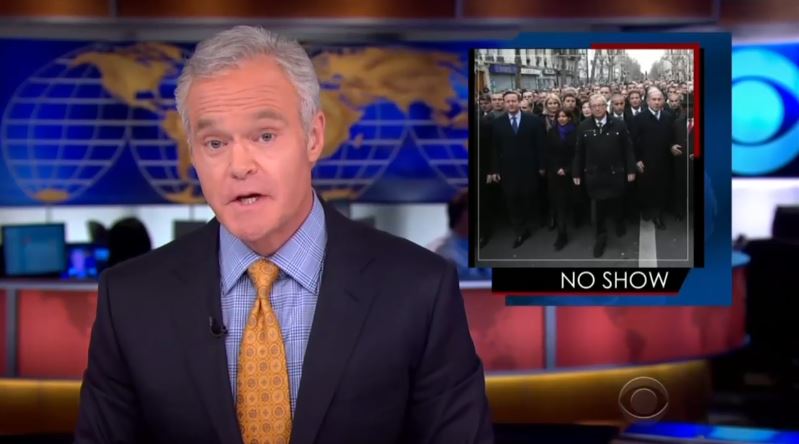 PELLEY: Today, the Obama administration said it made a mistake by not sending a high-ranking official to yesterday's historic march in Paris. You saw the world leaders leading the procession arm in arm, but Mr. Obama was not among them. The U.S. sent only its Ambassador to France.

The full transcript of the tease and segment that aired on NBC Nightly News on January 12 can be found below. 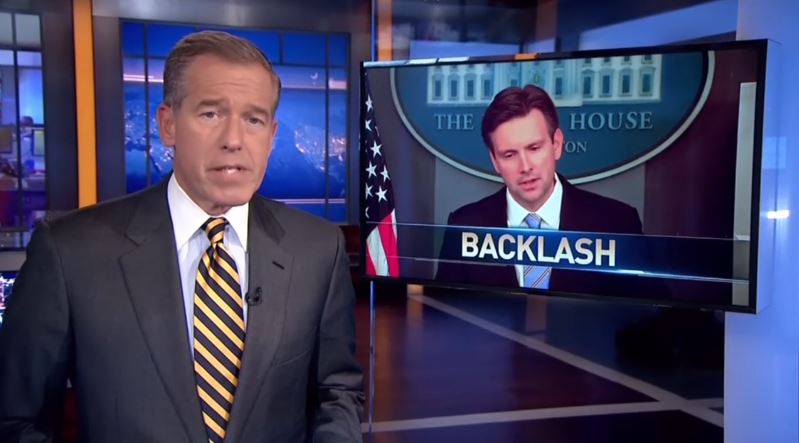 BRIAN WILLIAMS: On our broadcast tonight, backlash. World leaders converge on Paris with millions of people in a show of solidarity against terrorism, but where was the American delegation from the President on down? Tonight, the White House forced to admit it made a mistake.

WILLIAMS: Good evening. It was the largest crowd in the modern history of Paris, a crowd not seen since the liberation of Paris from the Nazis in World War II. An estimated 1.5 million people showed up in defiance of terrorism and leading the march, with arms locked together, many of the leaders of the free world. Missing from the picture was the man so often referred to as the leader of the free world, President Obama. No sign of him, Vice President Biden or Secretary of State John Kerry and today, the White House admitted it was a mistake. They said they should have sent someone of higher rank than the U.S. Ambassador to France to stand with the rest of the world in solidarity. It's where we begin tonight with our chief foreign affairs correspondent Andrea Mitchell.

MITCHELL: It was an event so powerful it united enemies. Israel's Netanyahu in the grip of a security man at each elbow only a few arm lengths from the Palestinian President Abbas. At least 44 world leaders in a gathering of more than a million. The highest ranking American official? U.S. Ambassador Jane Hartly, the woman in dark glasses, so far back you can barely pick her out of the crowd. Where was President Obama Sunday? In the White House all day. The Vice President, no public schedule, at home in Delaware. The Attorney General was in Paris, taping television interviews, but didn't join the march. The Secretary of State? In India Sunday and Pakistan today. 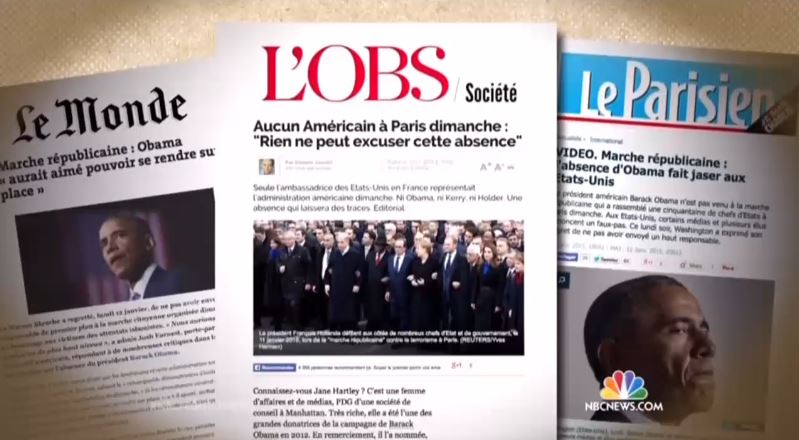 STATE JOHN KERRY: And I really think, you know, this is sort of quibbling a little bit.

MITCHELL: Tell that to the New York Daily News and the French press, headlining “No American in Paris Sunday, only the U.S. Ambassador. Not Obama nor Kerry nor Holder.” After seeing the worldwide criticism by early afternoon, a chastened White House admitted to the mistake.

WHITE HOUSE PRESS SECRETARY JOSH EARNEST: Here at the White House, we do believe we should have sent somebody with a higher profile to the March beyond just a U.S. Ambassador.

MITCHELL: Was it a diplomatic faux pas? The French Ambassador, who joined a similar march in Washington, with the French foreign head of the International Monetary Fund Christine Lagarde, was polite.

FRENCH AMBASSADOR TO U.S. GERARD ARAUD: So, from the French side there is absolutely no feeling – no hard feelings. 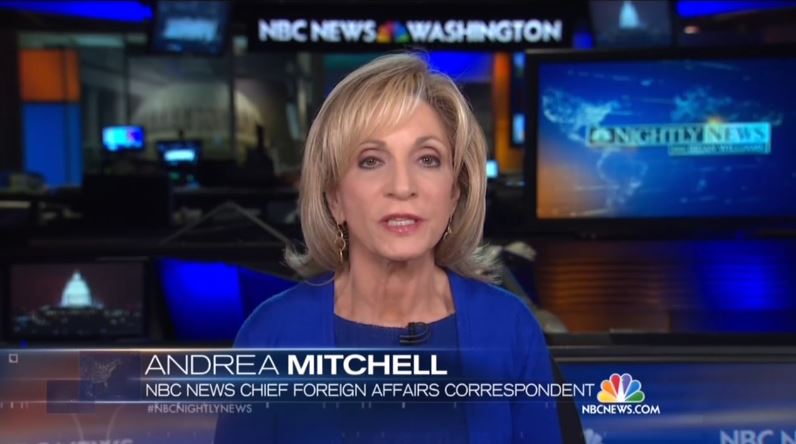 MITCHELL: The President did sign a condolence book at the French Embassy in Washington last week, but no mention today during his public appearances of the extraordinary gathering of his fellow world leaders in France. Even some administration officials say that the White House simply misjudged the symbolic importance of showing up at that march. The Secretary of State will go to Paris on Thursday attending meetings in nearby Geneva to try to repair the damage.