Taking cues – intellectual, ideological, political – from celebrities is never a good idea. Talent rarely equals insight. Take Demi Lovato. Her recent fascination has been the wild world of gender pronouns, as she has recently switched back to a ‘she/her’ from a ‘they/them’ because “she is ‘feeling more feminine’,” as reported by Yahoo News August 3.

A year ago, she decided she was “non-binary” and began to use the pronouns ‘they/them’. Now, on her Twitter, she changed them back to ‘she/her’ and confirmed it on Spout Podcast August 2.

Changing genders like changing clothes. Why do we take this pronoun business seriously again? 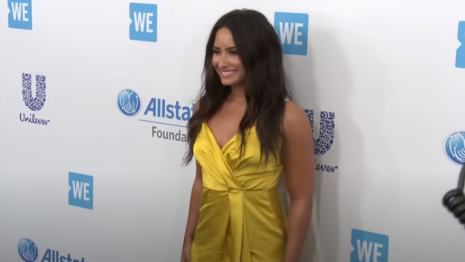 Lovato certainly isn’t, as she said in regards to her initial non-binary change that, “I felt like, especially last year, my energy was balanced and my masculine and feminine energy so that when I was faced with the choice of walking into a bathroom, and it said, women and men, I didn't feel like there was a bathroom for me because I didn't feel necessarily like a woman.”

What’s all this talk about “masculine and feminine” energy? Is she implying the gender binary’s existence by saying this? Why is this being made so complicated? What is she even talking about anymore?

She changed back to ‘she/her’ because she’s “been feeling more feminine.” It’s very clear that she sees this pronoun business for what it really is: a superficial and fake trend. She cynically adopted ‘they/them’ as a way to gain publicity and brownie points from the left and reverted back when the change was losing its luster.

Pure celebrity narcissism at its finest. No surprise that superficial and selfish people are attracted to leftist ideas that elevate the self-identity above reality itself.