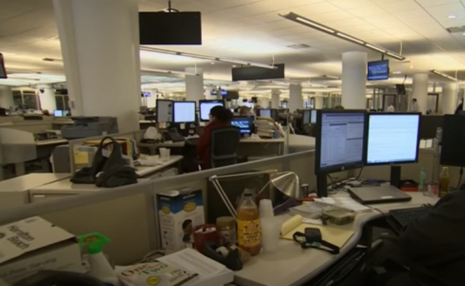 According to CNA, AP “instructs writers to avoid terms like ‘biological sex,’ ‘male or female hormones’ and ‘sex change,’ and replace them with substitutes like ‘sex assigned at birth,’ specific hormone names, and ‘gender transition,.”

And whatever they do, writers should avoid “deadnaming” – calling John “John” after he’s decided to become “Jane.” That’s a slur, according to AP.

And this is the stylebook that is ubiquitous across journalism. It’s language control that’s stepping more into 1984 ‘newspeak’, and less benign grammatical correction like the stylebook has mostly been. You will accept the new language, or you will be branded a heretic and a thought criminal.

AP also devotes a section to transgender sports, “warning writers not to ‘misgender or imply doubt’ about transgender athletes, specifically males competing in women’s sports,” according to CNA. “The guide bars writers from using the phrase ‘former men’s swimmer,’ directing them to say that transgender players ‘are banned from playing on teams in line with their gender.’”

They add a litany of recommendations perfectly in line with liberal orthodoxy, such as not using “groom” to describe predatory LGBT behavior. They say it “‘falsely liken[s] LGBTQ people’s interactions with children’ and LGBTQ education to child molestation.”

No, it calls out creepy degenerates teaching little kids about gay sex. It’s not that deep.

If your journalism hurts people’s feelings, then you are no journalist, so says AP. Whatever credibility this organization has is seriously in question.