The overturning of Roe V. Wade has all liberals from every creed, profession, and gender seething in rage about the prospect of their inability to kill kids in some states. Professing a love for life is enough to earn the contempt of the left, as demonstrated by University of Michigan med students walking out of a white coat ceremony in protest of a pro-life professor on a keynote address, reported Salon July 25. 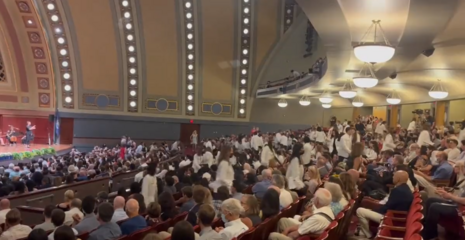 Dr. Kristin Collier, a professor at the University of Maryland Medical System (UMMS), spoke at the ceremony that’s designed to be “welcoming students into the profession of medicine,” said The University of Michigan. They said it would not “be used as a forum to air personal political or religious beliefs.” Good thing the university isn’t backing down from clear virtue signaling students.

Some 340 students signed a petition before the address condemning Professor Collier’s participation. According to Salon, the petition reads, “While we support the rights of freedom of speech and religion, an anti-choice speaker as a representative of the University of Michigan undermines the University's position on abortion and supports the non-universal, theology-rooted platform to restrict abortion access, an essential part of medical care.”

The video of the incident was posted to Twitter below:

Incoming medical students walk out at University of Michigan’s white coat ceremony as the keynote speaker is openly anti-abortion pic.twitter.com/Is7KmVV811

Professor Collier has a history with espousing pro-life sentiments. She tweeted this in May:

Holding on to a view of feminism where one fights for the rights of all women and girls, especially those who are most vulnerable. I can't not lament the violence directed at my prenatal sisters in the act of abortion, done in the name of autonomy, Liberation that costs innocent lives is just oppression that is redistributed.

She even says she’s feminist. How could they hate her?

Feminist or not, if you value the life of a baby, you are excommunicated from the church of leftism. It’s believe it all, or be branded a heretic to a Godless faith.