Rapper Cardi B and Candace Owens, conservative author and activist, cooked up some tasty beef for the Twitter world to feast on this week. The epic battle was so serious, the law is now getting involved. 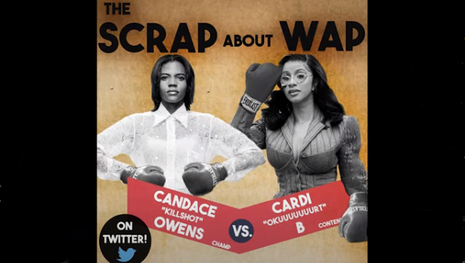 The feud began on March 16 after Cardi reposted a clip of Owens on Tucker Carlson’s show slamming her vile Grammys performance. Owens voiced exactly what we were all thinking when she told Tucker that Cardi’s performance was “a lesbian sex-scene being simulated on television and this is considered feminist.” Unfortunately, this is a very accurate live performance.

Owens continued to critique the horrific display of sexual degeneracy that was Cardi’s and Megan Thee Stallion’s performance, calling it “an attack on American values and American tradition.” She charged that the entertainment establishment is “making children aspire to things that are grotesque.” She then pointed out that people who object to such filth are considered bigots. Owens concluded that “parents should be terrified” and that this is a “weakening of American society.”

Owens “got a bucket and a mop” to then clean the floor with Cardi B by threatening to sue her over the use of clearly fake tweets insuinating her being cuckolded by her husband with her own brother. Apparently, Owens intends to make good on this threat: “Yes. Just spoke with my family. I am 100% suing Cardi for that nonsense. You can’t just start throwing out wild lies against private members of my family because you’re upset someone called you out on your degenerate performance. I‘ll keep you all posted.”

Cardi has apparently taken this threat to heart and has since deleted all tweets relating to the dispute.

Owens will not be letting her off the hook so easily. Today she tweeted, “Gee. I wonder what made @iamcardib delete the photoshopped tweets regarding my husband and brother. Too late, degenerate. You mess with my family, I won’t stop until I’m the CEO and chairman of that WAP.”

Gee. I wonder what made @iamcardib delete the photoshopped tweets regarding my husband and brother.
Too late, degenerate.
You mess with my family, I won’t stop until I’m the CEO and chairman of that WAP https://t.co/zMFjKTqW9A