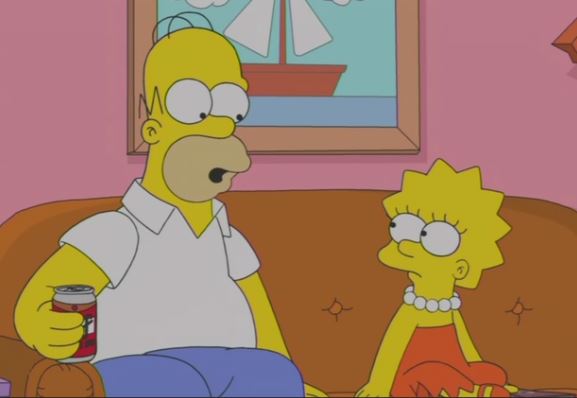 The Simpsons repeated the popular left-wing narrative of rampant racism in the United States in season 30, episode nine, titled “Daddicus Finch,” which aired on Sunday night.

The episode focused on a strong father-daughter relationship between Homer Simpson and Lisa, but also managed to sneak in the left-wing narrative when talking about the book “To Kill A Mockingbird.”

The show made it evidently clear why they had Homer say this, as well. In the very next scene where Homer and Lisa are at the Springfield mall, the show’s TV news anchor, Kent Brockman, can be seen interviewing three blue collar men who voted for President Donald Trump seemingly to guilt them for their votes.

-- Marge: Homer, I want you to do something with Lisa.

-- Marge: You're not speaking to her or even making eye contact.

-- Homer: Oh, you'd be surprised at the things my eyes are in contact with.

-- Marge: Okay. Well, what is she doing right now?

-- Homer: Now just remember, it's set in the South a long time ago. The terrible racism you're reading about is now everywhere. We're gonna shop at all the stores you like that have a chair I can sit in, except the chair store. I'm not allowed back there.

So not only does the show make the absurd claim that racism is everywhere in the country, implying that it is worse than it was in the Jim Crow-era South, but it seems as though they are trying to pin it on President Donald Trump and his administration.

Even if the show is trying to make a joke, it’s not one that lands. "To Kill a Mockingbird" was set in 1936 Alabama where interracial marriage was considered a crime, whites and blacks were segregated in public facilities and black men could not be treated by white female nurses. That’s true institutional racism and the amount of people in the country today who would support such policies are a tiny fringe; they are also condemned by both major political parties.

Although the “America is racist” narrative may not make sense to everyday Americans, who understand racism is bad and choose not to engage in it, it makes more sense if one understands the politics of the show’s creator, Matt Groening.

A self-identified liberal, Groening is a known donor to the Democratic Party--and this includes giving money to former presidential candidates like Hillary Clinton, Al Gore and John Kerry. Groening even started a “lock him up” chant at Comic-Con in 2017, referring to President Trump--a variant of the “lock her up" chants Trump’s supporters did at his rallies in 2016.

Surely, The Simpsons is not the most political show on television, but that does not stop them from taking that route from time to time.