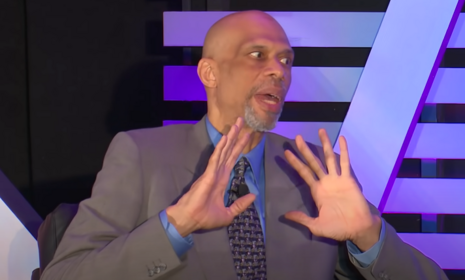 On October 29, with election day looming upon the nation, hollywoodreporter.com published a lengthy work penned by the former basketball star. Written in a dramatic tone, the piece is a plea for people to go out and vote for Joe Biden, as well as an appeal to distrust Donald Trump due to a lengthy list of reasons. The problem is that Abdul-Jabbar’s reasoning is full of rubbish.

His opening sentences described how voting for Trump is like wanting America to resemble the “theme park version of Mayberry in the 1950s,” while voting for Biden is “a commitment to build a reality that embraces the U.S. Constitution’s values of equality and inclusion.”

“The past four years have indeed been a crime scene in which the America of the U.S. Constitution has been duct-taped to a chair and relentlessly waterboarded by those chanting ‘Make America Great Again,’” Abdul-Jabbar wrote. “To them, Trump is not a real person, he is a cult figure in whom they have blind faith regardless of what he says or does. Evidence is dismissed — including his own recorded admissions of guilt that prove he has disregarded their welfare, health and even their lives.”

He’s one to talk about “blind faith.” The left itself seems to put an awful lot of trust in a man who has been accused of sexual assault, is currently involved in a scandal concerning his son’s deals in China and the Ukraine, and whose mental capacities are steadily declining. In addition, none of them are displeased that the “evidence is dismissed” for all of Biden’s troublesome affairs.

Abdul-Jabbar continued, “If you think that sounds harsh, then you haven’t been paying attention as the Trump Administration has reduced benefits for the poor, dismissed the existence of systemic racism, endangered the free press, and fought to reduce the rights of women, immigrants and the LGBTQ+ community.”

Obviously, Abdul-Jabbar himself has failed to pay attention to the fact that Biden has planned to raise taxes (which will damage the economy), uttered racist remarks himself, and has remained silent while his supporters actively censor social media posts that criticize him or support Trump.

As for reducing the rights of women, is Abdul-Jabbar trying to be funny? Amy Coney Barrett may have a somewhat different opinion on Trump and the rights of women. Trump has allowed another female justice onto the Supreme Court and pardoned renowned suffragist Susan B. Anthony.

“Perhaps the most evil, insidious and even traitorous action by Trump and the Republican politburo is the aggressive suppression of the vote of minorities, the poor, seniors and youth,” Abdul-Jabbar fumed. Of course, he was referring to how “Trump, whose entire family votes by mail, has tried to undermine mail-in voting.” Here’s a little lesson in logic for the protest-loving Abdul-Jabbar: if it’s safe enough to go out and protest, it’s safe enough to go out and vote.

But it sounds like Abdul-Jabbar has spent the last four years living in a nightmarish hellscape created by his own imagination. Maybe if Biden wins, he’ll finally be able to get some free meds.