“When we discussed with Warner Brothers … what our Emmy campaign might be,” Lorre responded, “I blurted out ‘Let’s give the money to Planned Parenthood!’ and they took me seriously.”

“It makes sense,” Janney, who was wearing a Planned Parenthood shirt and pin, chimed in. “Our show is all about women and we don’t shy away from dealing with all issues that affect women and families.”

The actress continued by noting how “critical” it was to “stand up now” for the nation’s largest abortion provider.

“Planned Parenthood is such an important organization that helps gives health services to millions of women and families,” she stressed. “It’s in danger of– the House of Representatives voted to defund it.” 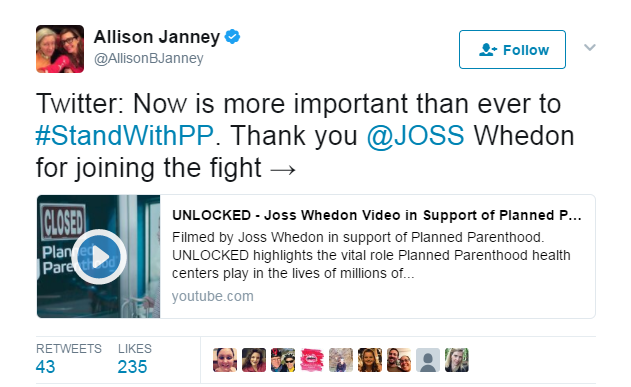 Janney’s plea echoes a project released yesterday by Hollywood director Joss Whedon –a YouTube short film imagining a “truly dire” world without Planned Parenthood. After its release, Janney linked to the video and tweeted her support: “Twitter: Now is more important than ever to #StandWithPP. Thank you @JOSS Whedon for joining the fight.”

Liberal activists and media outlets often spin the GOP’s proposed defunding of Planned Parenthood as a way to prevent access to healthcare.

For example, in an article about the Mom donation, Hollywood Reporter writer Lesley Goldberg wrote: “The news comes as the U.S. Senate is mulling legislation that would block low-income patients from going to Planned Parenthood for preventative care.”

However, when President Trump informed Planned Parenthood that it could retain government funding in exchange for ceasing to perform abortions, many progressives spurned it. And the media spun it negatively.