The Anti-Trump resistance has gotten a magic makeover. 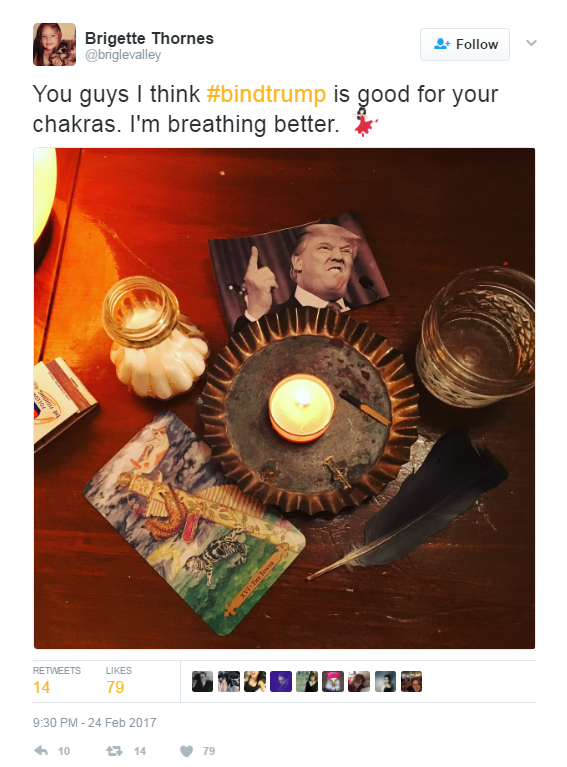 Last weekend, a group of witches assembled their tarot cards, Trump photos and orange candle stubs and cast a “binding spell” over the president. After a long incantation, many concluded with “so mote it be,” while others simply said “you’re fired!”

“It’s clear that [Trump’s] opponents are willing to try anything at this point,” wrote Rolling Stone’s Lilly Dancyger, “so maybe a little witchcraft isn’t such a bad idea, after all?”

Stop your giggling. The official “Bind Trump” Facebook group has nearly 600 members, and they’ve gotten plenty of media attention. Until the president is “driven from office,” they’ll be casting spells on each waning crescent moon.

Singer Lana Del Rey was clearly on board, tweeting a photo of herself with the caption: “At the stroke of midnight Feb 24, March 26, April 24, May 23 Ingredients can b found online.”

But unlike hexes, the incantations are not intended to hurt Mr. Trump. As organizer Michael Hughes explained in a Medium blog post, binding spells simply preclude the object and “all who abet him” from doing harm.

“It is ripping the bullhorn from [Trump’s] hands,” Hughes expounded, “smashing his phone so he can't tweet, tying him up, and throwing him in a dark basement where he can't hurt anyone.”

On February 24, an official group gathered outside of Trump Tower, while others worked from the comfort of home. And although he published instructions for the ritual, Hughes clarified that it could be “modified to fit your preferred spiritual practice or magical system.” (Witches are tolerant folks.) 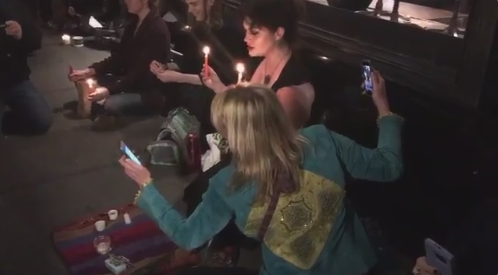 BuzzFeed reporter Julia Reinstein attended the Trump Tower event and captured footage of the ritual, including a face-off between a self-described “Christian mystic” and the witches.

Christians would obviously disagree, and their counter-resistance is brewing too. On February 24, the Christian Nationalist Alliance organized a Day of Prayer in response to the mass ritual. “We beseech all Christian soldiers,” wrote CNA’s April Lavalle, “to join us in praying for the strength of our nation, our elected representatives and for the souls of the lost who would take up Satanic arms against us.”

This “Bind Trump” movement is not the first to be targeted against the president. As Dancyger pointed out, at least three covens have focused their energies against Mr. Trump in the past year and a half. One group specifically sought to snap his artery, writing that “we don’t wanna kill him, we just wanna break his heart.”