Close your eyes for a moment and picture Mt. Rushmore. First, you see America’s two most iconic founding fathers, then a war hero, and finally, the man who preserved the Union and emancipated the slaves. But if ESPN Style Writer Jill Hudson had her way, Michelle Obama would be up there with them—for her fashion sense.

In her January 12 article for ESPN’s The Undefeated, Hudson could not contain her gushing praise for the “glamorpuss” FLOTUS. 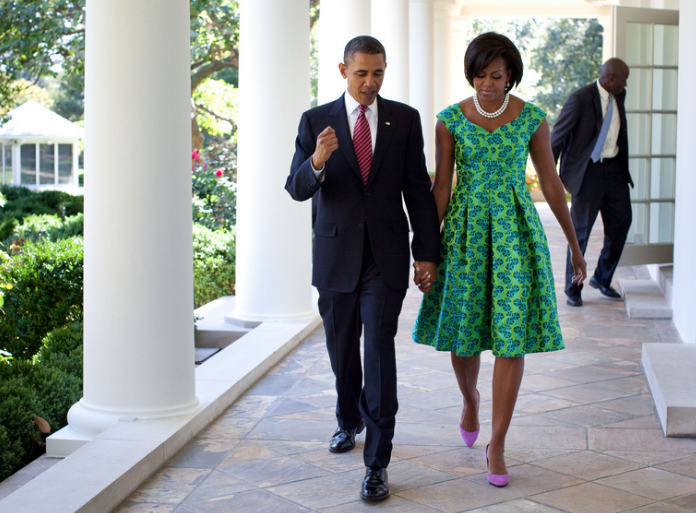 “When Michelle Obama leaves the White House for the last time on Jan. 20,” Hudson wrote, “her fashion legacy is completely assured. We’re talking carved in Mount Rushmore granite, shined up with shea butter leg grease and co-signed by #BlackGirlMagic.”

According to Hudson, the first lady’s style is so captivating that even the Almighty is entranced. “If God has been collecting style receipts for the past eight years – and you know he has been – Obama is a first-ballot Hall of Famer,” she wrote.

Obama’s clothes reached a sweet spot in 2011, and by then, even her hair had “started doing magical, fairy-tale things that wrote their own headlines.”

The praise went on and on, culminating in the line: “For eight glorious years, Obama was the kitten-heeled sun in our messy American sky. Sail on, girl. You will not be forgotten.”

Obama herself expressed annoyance with all of the style coverage, noting at a 2013 summit: “While people are sorting through our shoes and our hair and whether we cut it or not ... whether we have bangs ... We take our bangs and we stand in front of important things that the world needs to see, and eventually people stop looking at the bangs and they start looking at what we are standing in front of.”

Hudson is hardly the only fan girl reporter. Do a quick Google search of “Michelle Obama style,” and you’ll find plenty more over-the-top coverage. Oprah even called her “the coolest first lady in American history.”

From awarding Bruce “Caitlyn” Jenner the Arthur Ashe Courage Award, to moving a tournament from a Trump-owned golf club, there is no question that ESPN has veered leftward in recent years. The network’s Public Editor Jim Brady admitted as much last November, noting that some ESPN staffers and readers had been dismayed by the shift.