Hollywood Freaks Out: ‘About to Throw Up’

Around 10 p.m., Hollywood stars began to panic. Hillary Clinton wasn’t as far ahead as they had expected her to be. In fact, the race was far from a landslide. Reflecting the anxiety of the Tinsel Town set, actress Mia Farrow re-tweeted a NYT poll showing that, as of 9:40 pm, Trump had a 55-percent chance of winning the election. As a comment on the tweet, she simply posted: “Xanax.” 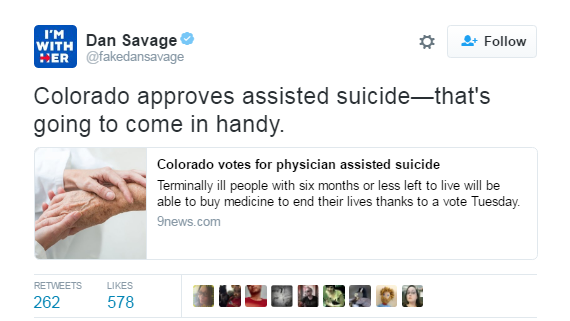 Several celebrities indicated suffering physical symptoms. Funny or Die comedian and actor Billy Eichner posted: “Still feeling confident but about to throw up.” After tweeting “And Trump has closed a wide gap in North Carolina. Another shot, please,” Dan Savage commented “I’m going to puke.” Later in the evening, he intimated that death would come as sweet relief in the event of a Trump presidency. “Colorado approves assisted suicide,” he noted about an article from a local Colorado news outlet. “That’s going to come in handy.”

Model Emily Ratajkowski tweeted “Ok I’m getting really nervous,” while Khloe Kardashian expressed her view that “it shouldn’t be this close.” Singer Mandy Moore was flummoxed. “I am absolutely beside myself right now. I can’t believe the way this thing has turned. Trying to remain hopeful but geez louise.” 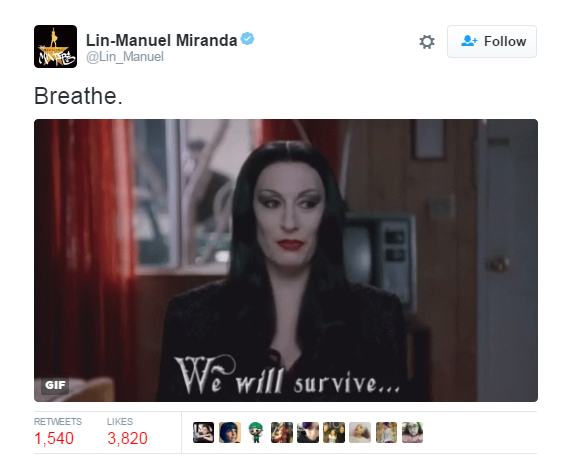 The Hollywood Reporter writer Lacey Rose declared “So. Much. Anxiety.” Comedian Sarah Silverman seemed to despair further. “Someone give me hope,” she pleaded. Rapper/Singer and Hamilton star Lin Manual Miranda tried to calm the bunch. “Breathe,” he wrote above an attached picture with the words: “We will survive.”

Expressing his sentiments in two pregnant words, British Late Late Show host James Corden posted: “Brexit Feelings.” Cher was channeling the same thoughts. “Ask yourself “DID I DO ALL I COULD HAVE DONE”!? It’s a good Lesson. We r still Try’n 2have hope. SAW BREXIT RIP GB APART IN ONE NITE,” the singer tweeted in her signature all caps style.

Sarah Silverman finally gave up around 11 p.m with the alarmist comment: “Putin’s gonna win this thing.”