This @BetoORourke response, to a man in the crowd laughing about using AR-15s in schools, is perfection. 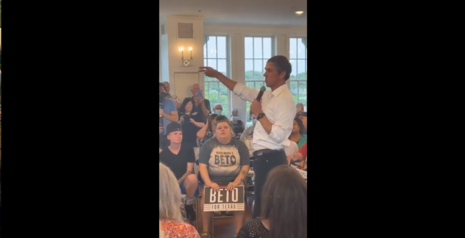 The tweet shows that Beto took the time to go after an Abbott supporter who began laughing while the gubernatorial candidate was talking about the Uvalde Massacre. “It may be funny to you motherf*cker, but its not funny to me, OK?,” Beto says to the cheers of his supporters. Beto seems pretty upset over the man who interrupted his event. Did he forget about the time he interrupted a press conference on the Uvalde shooting? Does he deserve the title of motherf*cker too?

The video reveals that the Abbott supporter was not laughing at the Uvalde shooting, but at Beto’s inaccurate history of the AR-15. Beto claimed these guns were “originally designed for use on the battlefield in Vietnam to penetrate an enemy soldier’s helmet at 500 feet and knock him down dead.” Just like the rest of his leftist politicians, Beto fails to understand the history of the AR-15. Does he not know that there are more powerful guns that are considered hunting guns? But of course, the AR-15 is the big, bad boogeyman.

Beto has once again displayed his lack of respect and lack of masculinity. Just another day in leftist fairytale land.