Gross: Teen Vogue Informs Teens How To Get An Abortion

The abortion zealots’ temper tantrums are still in full swing, melting down all over the internet. Just look at true-believer Teen Vogue.

Motherhood or abstinence are not options at Teen Vogue, and contributor Lauren Rankin is now providing teens with the steps in procuring an abortion. 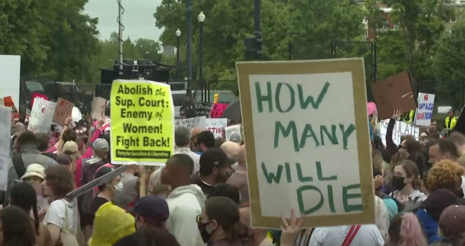 Rankin wastes no time providing the best resources for young women to murder their babies. She gives her young readers an interactive map of which states have banned abortion.

“Right now, the state of legal abortion is in flux as some states implement their trigger laws to ban abortion now that Roe v. Wade has been overturned. Thirteen states have trigger laws, but they are not all currently in effect,” she wrote. “The Guttmacher Institute is currently refreshing information on abortion’s legality across the states in real time at their interactive map. Teen Vogue is also tracking this information here.”

It gets worse as she expands the list to include which states require parental notification and which do not. Good on Teen Vogue for causing chaos and distrust amongst family members.

Rankin wanted young girls to go before a judge for permission rather than talk to one’s families. “Judicial bypass allows you to go directly before a judge and get approval from that judge to have an abortion, rather than having consent from your parents,” she stated. “Yes, it’s paternalistic and unfair that you literally have to get permission from someone else to choose what to do with your body, but it is an option for legal abortion.” Essentially, “go behind your parent's back and murder your child and their grandchild!”

Rankin didn’t leave out the ultimate in infanticide convenience: abortion at home. “It is possible to safely self-manage an abortion through medication abortion. The World Health Organization has specific guidance on self-managed abortion with pills up to 10 weeks of pregnancy,” Rankin continued. “You can purchase medication abortion online through reputable sites like AidAccess.org or Plan C.”

Nothing like promoting the most “convenient” way to murder your child! But what if you’re a young teen who does not have the money for an abortion? Well, Rankin provides the links to have the abortion funded. “Abortion funds are here to help you,” she concluded. “Even if your state has banned abortion, abortion funds can still provide financial support, and they can help connect you to an abortion clinic in another state, or help you access medication abortion.” How kind of her.

Instead of promoting a chaste or family-oriented lifestyle, Teen Vogue wants to promote its standard debauched content. So what can you expect from a site like this?