Is the Bishop Catholic? Iowa Diocese Gets Real About Gender

It used to be common to affirm a sure thing by asking, “Is the pope Catholic?” Then we got a Jesuit pope. So it’s time to update the trope and ask, “Is the Bishop of Des Moines Catholic?” 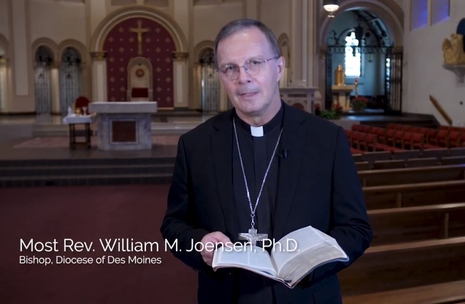 Bishop William M. Joensen certainly is. You can tell because his new policy regarding transgenderism has all the right people howling with outrage.

According to the Washington Times, the Des Moines diocese “has come under fire for its Gender Identity Guide and Policy, a six-page standard that went into effect Monday explaining the church’s position on gender dysphoria and listing binding rules for affiliated parishes, schools and organizations.”

What could the document contain that would so upset the an queer group called One Iowa and the Interfaith Alliance of Iowa?

Under the policy, a person’s biological sex determines his or her pronouns, restrooms, locker rooms, attire and uniforms, as well as participation in scholastic sports, camps and retreats. The rules ban the on-site distribution of medications for gender transition, including puberty blockers.

The horror! The groups say the Bishop is “promoting a harmful narrative through dangerous policies targeting its staff and students who are transgender.”

And really, what could be more dangerous than reverting to the way things were until the week before last and for 5,000 years before that?

And, like everything else to do with the Church, it’s voluntary:

The policy noted that some parishioners “may disagree with these practices, and we acknowledge their freedom of conscience to withdraw or absent themselves from situations they find objectionable.”

“Concomitantly, they must likewise respect the church’s mission to witness to truths accessible to reason and faith if they are to fully participate in our faith communities, including our Catholic schools,” the policy said.

So, if you don’t like it, join the Episcopalians. (Their lesbian bake sales are to die for!)

That’s not good enough for Dem. state Sen. Claire Celsi, who complained that the diocese is “trying to shun and exclude people based on their sexual orientation and gender expression.” Iowa has a school choice proposal that would allow parents to put the per-pupil cost of public school toward private, including Catholic, school tuition. Because Sen. Celsi is a Democrat, she believes that money is the state’s, not the taxpayers’:

“These schools want public dollars and want to treat kids in a way that might cause them to commit suicide. This is not what Jesus would do,” Celsi wrote on Facebook, demonstrating the command of psychology and theology for which state senators with marketing backgrounds are universally revered.

So good on the bishop. These days it takes guts for Catholics to, ya know, be Catholic.