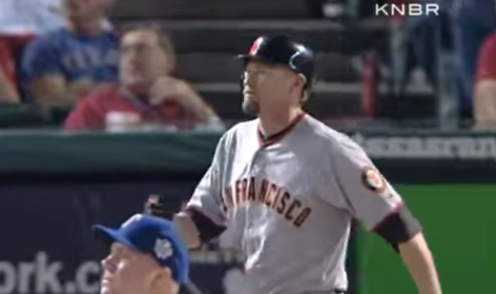 On Halloween night of 2010 Giants first baseman Aubrey Huff cracked a two-run homer off righty Tommy Hunter to nail down Game Four of the World Series against the Texas Rangers. Overall, Huff batted .294 with five hits, a home run, and four RBIs in the Giants’ first World Championship since Willie Mays was a young man.

So as the ball club readies a 10th anniversary celebration and reunion, there’s no way they’d leave out the now-retired Huff. Except they have, because cancel culture has made the big leagues.

“Earlier this month, we reached out to Aubrey Huff to let him know that he will not be included in the upcoming 2010 World Series Championship reunion,” the Giants announced on February 17. Wow, he must have knocked over a liquor store or beat his wife or something, right?

“Aubrey has made multiple comments on social media that are unacceptable and run counter to the values of our organization,” the Giants said in a statement. That’s it? What kind of comments? What kind of values?

Silly, unserious comments and lefty San Fran values. First, there was this pearl-clutcher:

Okay, maybe the tweet wasn’t a good idea. Lefties are triggered (sorry) by men, boys and guns in the best of circumstances, but put the three together, toss in a political reference and you’ve got soiled culottes all over the Bay Area.

Then there was this one, which we’ll let the San Francisco Chronicle describe:

In an even more decried tweet, responding to another that suggested the United States should invade Iran and bring some of their attractive women here, Huff said, “Let’s get a flight over and kidnap about 10 each. We can bring them back here as they fan us and feed us grapes, amongst other things.” He later deleted the tweet, which he said was intended as a joke.

So it was a joke, not a statement of criminal intent? He wasn’t really going around the world to a hostile nation to grab some sex slaves? That’s a relief.

There was at least one Huff tweet that you can’t blame the Giants for disliking: “Huff last month tweeted criticism of the Giants for hiring a woman to coach, Alyssa Nakken, terming it political correctness.”

Yeah, publicly criticizing your old organization’s personnel moves -- no matter how stupid and nakedly pandering they are -- will always draw resentment from the team … Wait, what’s this? “... but the team said it decided not to invite Huff to the reunion before the Nakken tweet.”

For Huff’s part, he confirmed that the Giants had excluded him. “My locker room humor on Twitter is meant to be satirical, and sarcastic,” the former first baseman wrote. “And it was the type of humor that loosened up the clubhouse in 2010 for our charge to the World Series.”

Furthermore, Huff addressed “the Giants board members who seem to think every Giants fan is a liberal,” saying “I have thousands of die hard Giants fans reach out to me on my social media platforms to support me.”

Big if true. Look, Huff is a dinosaur -- a throwback to the dark ages of the 2010s. The Giants know it, and they have a responsibility to shield the people of San Francisco from the kind of monster who would say, “To the fans, you were always amazing to me. And just because I might not share some of your political views (which are stupid) I still repect your right to express them.”