It’s the 75th anniversary of D-Day. Getting a little choked up about the endless lines of white crosses and the few stooped and wizened survivors being rolled slowly among them? Feeling slightly in awe of men who could scale Pointe du Hoc, drag themselves up the shingle on Omaha or jump from an airplane into tracers and flak? Feeling, well, a touch grateful? That’s nice. Time’s up. 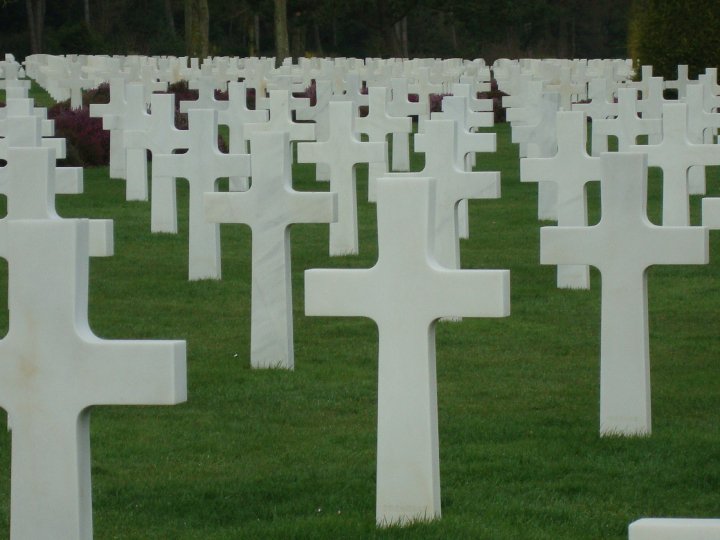 The Washington Post wants you to remember “the dark side of American war efforts,” so it’s June 6 edition contains an op-ed by one Ruth Lawlor, who bravely parachuted into a PhD candidacy in history at the University of Cambridge and is tenaciously fighting to hold a Fox International Fellowship at Yale. Lawlor said we’re celebrating “one of the most storied moments of “the good war,” when the forces of freedom and democracy stormed the beaches of Normandy to liberate France and, ultimately, the rest of Europe. But how accurate is our memory of this event?”

Given the state of our public schools, I doubt it’s very near the mark, but you know that’s not what she’s on about:

In joining the global war effort, the U.S. government and military claimed to fight for the Four Freedoms and decried Hitler’s racist ideology. But they also scapegoated African American soldiers for sexual crimes abroad, used false stories about rape to justify racial segregation at home and ignored sexual crimes committed by white GIs.

Wait, that’s it? Lawler and The Post inserted themselves into a solemn commemoration of a hard-won and unimpeachably noble victory to tell us: 1.) bad things happen in war; 2.) American blacks were treated badly in the 1940s; and 3.) some Southerners didn’t behave morally in their ongoing defense of the morally indefensible?

You see, “By romanticizing World War II, we have neglected to confront the darker underbelly of American military engagement,” Lawlor asserted. Have we? Um, sorry? Tell you what, as soon as we get done running the Founders through the mud, dismissing as meaningless the 600,000 deaths of the Civil War and tearing down statues, we're on this.

Lawlor says GIs committed rape in liberated Europe. How often, she didn't say. She offered no hard numbers to back up the assertion, though she cited some U.S. generals worrying about keeping order behind the front lines. (Something every general in every war ever waged worried about.) She didn’t compare U.S. sexual violence to, say, the advancing Russians, for whom rape was doctrine.

But let’s stipulate: you put a million men under arms, some percentage of them will act in a criminal way over the course of several years. Let’s also agree that, as second class citizens back home and serving in segregated units overseas, African-Americans probably did get scapegoated for some crimes whites committed. Maybe there’s an important story there, or maybe it's just more human folly and evil best forgotten. But the 75th anniversary of D-Day seems like really bad time to summarize the American war effort as “perpetuat[ing] racial inequality and a militant form of misogyny, both of which were intensely violent.”

Really, if you’re gonna flip the bird at the herculean efforts of some 90-yr-olds and their dead comrades, have the decency not to do it with a non sequitur. Lawlor helpfully pointed out that “to see Nazism as an absolute evil does not require that we view the United States as an absolute good.” No, ma’am. But it helps to acknowledge American good exists.

But this isn’t really Lawlor’s fault. She’s a left-wing academic -- for her there’s no wrong time to hate America. Proof? Check out this paragraph:

In short, the military was a key producer of racialized rape myths during World War II, which army commanders and white supremacist political figures were able to use to their advantage. This situation persists: In 2005, soldiers of the 101st Airborne Division raped and murdered a 14-year-old girl in Iraq, highlighting the continuity of the military’s racial and gendered violence over time.

Read Lawlor’s link and try to find anything related to “racialized rape myths” or “white supremacist political figures." There are none. She just seems to like stories about U.S. soldiers acting badly, and why not toss one more on here while she’s spoiling the D-Day remembrance?

The fault is really with The Post. The paper can and does disparage Americans and their history whenever it chooses. But it selected Thursday to run an oped related to D-Day only in that it talks about the same war. It talks about criminals and injustice, cowardice and hate, on a day for heros.

Thursday is probably the last remembrance for those bent old men in the VFW hats. They won’t be around for the 80th. Some may have done things they aren’t proud of when they were scared, angry or grieving kids, but that’s between them and God. You don’t have to buy the “Greatest Generation” title to recognize that these guys did something special, earned a respect that even The Washington Post editorial staff should have trouble sneering at. If only for one day.