She’s only 26, so I suspect it will be years before “The Wit and Wisdom of Miley Cyrus” is compiled and published. You, dear reader, shouldn’t have to wait that long to learn the young sage’s thoughts on marriage. Specifically, her own marriage, and Hillary Clinton’s, er, place in it. 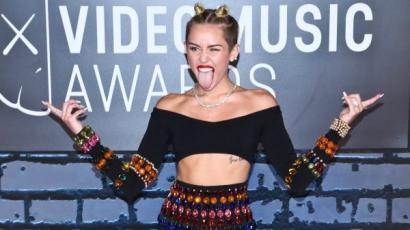 According to Fox, the one-time Disney property formerly known as Montana married her longtime boyfriend actor Liam Hemsworth in secret last December. Why in secret? Hell if I know, but Cyrus made a point of telling us, "I wore a dress on my wedding day because I felt like it." Indeed? Bully for you!

Not only that. "I straightened my hair because I felt like it, but that doesn’t make me become some instantly 'polite hetero lady.'"

Polite? Not a bit of it, Miley. You’ll always be a classless twerker to us. And lest readers mistake the naked wrecking ball rider’s reasons for tying the cherry stem as “old-fashioned,” she described them as “kind of New Age. We’re redefining, to be f—king frank, what it looks like for someone that’s a queer person like myself to be in a hetero relationship.”

But here’s where things get weird. She married Hemsworth because they lost their house in a California wildfire and Hillary Clinton had a really catchy campaign slogan and that ya know that Three Dog Night song?

"Without feeling like you’re putting a Band-Aid on a bad situation and saying, ‘Oh well, you know, now everything will be better.’ Because a lot of people use marriage I think maybe for a cure," Cyrus, 26, told Vanity Fair in their cover story released this week. "But like my favorite woman in the world, Hillary Clinton, says: We’re stronger together. That’ll make me get emotional. That’s what she meant by it. Like, who gives a f—k if he’s a guy, if I’m a girl, or if he was a woman — who gives a f—k? We really are stronger together. One is the loneliest number.”

It might make more sense to know that Cyrus is a bisexual … no? Well, it does to her:

“A big part of my pride and my identity is being a queer person,” she said. “What I preach is: People fall in love with people, not gender, not looks, not whatever. What I’m in love with exists on almost a spiritual level. It has nothing to do with sexuality. Relationships and partnerships in a new generation — I don’t think they have so much to do with sexuality or gender. Sex is actually a small part, and gender is a very small, almost irrelevant part of relationships.”

Mama’s don’t let your babies grow up to be pop tarts.