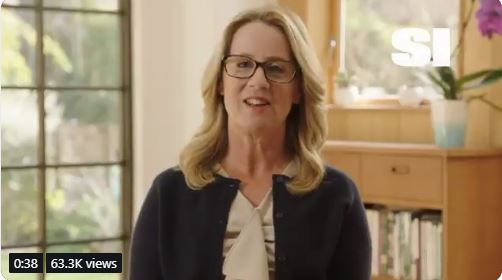 Kudos to Sports Illustrated for coming up with a creative new awards ceremony format in which a real-life heroine is introduced by the actress who played her on TV. That’s the only possible rationale for having Christine Blasey Ford involved in a ceremony honoring Rachel Denhollander.

Lawyer and former gymnast Rachel Denhollander was the first of 251 women to publicly accuse USA Gymnastics doctor Larry Nassar of sexual assault, and her hearing statement against him was eloquent and damning. Nasser was sentenced to 175 years in prison. Denhollander has been named Sports Illustrated’s Inspiration of the Year.

The honor is well deserved. So why cheapen it with politics? And including Christine Blasey Ford is political. Her videotaped introduction wasn’t itself noteworthy. But linking her to Denhollander and Nasser’s other victims is.

Ford’s turn in the spotlight in September, a last-minute play to stop the confirmation of Judge Brett Kavanaugh to the Supreme Court, lacked just about everything the case against Nasser had; you know: details, witnesses, credibility.

SI is a reliable progressive organ, and including Ford helps foster the myth that she was a credible, self-sacrificing victim of Kavanaugh and Republicans and male-dominated yada yada yada. Denhollander and other women who suffered abuse from Larry Nasser and eventually made him pay deserve thanks and respect. They don’t deserve Christine Blasey Ford.