Warning: As a normal, well-adjusted individual, this column should frighten and confuse you.

I saw today that the Buffalo Wild Wings chain has introduced pumpkin spice wings. I only mention it to observe that a) it’s an abomination against nature and nature’s God and b) the Estrogen Industrial Complex’s emasculation-by-pumpkin-spice project is proceeding apace. When somebody figures they can make a buck tarting up the ultimate bar food with nutmeg (nutmeg!), we’re not too far from the day when “Guy-Time” will mean curling up with a flavored coffee and dreaming of Paris. 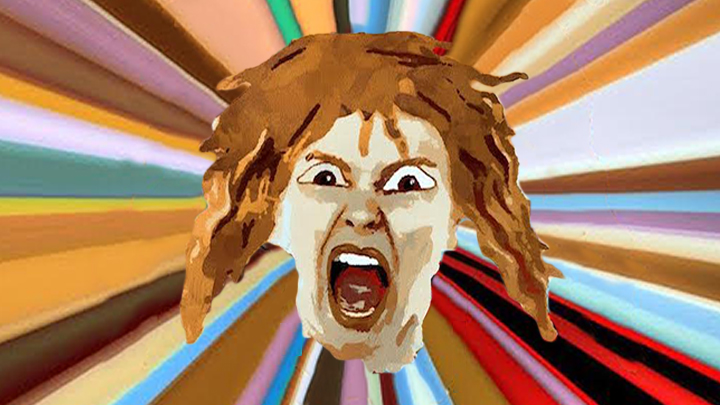 Which is why it’s funny that feminists in all their variety are so torqued off just now (funny-weird, not funny-haha. That’s not to say it can’t be funny-ha-ha. In fact, I’m normally all for funny-ha-ha in re feminists. And far be it from me to hinder anyone's enjoyment at their expense. But for our purposes here, I mean funny-weird.)

Yes, I know, feminists are always torqued off. Their anger isn’t optional, like undercarriage coating. A happy-go-lucky feminist is a car without a drivetrain. But the Kavanaugh confirmation cut deeply. It must be sobering to realize that in 21st Century America it’s not enough to have lady parts, you still need evidence to destroy those you disagree with.

They’re especially livid at the very moment they should declare victory. One look at the hipsters infesting our cities will tell you there’s no testosterone glut. Feminists have convinced the entire left side of the political spectrum that masculinity is “toxic” and every guy is just a closed hotel door away from sexual assault. (They got a timely assist from famous liberal guys who can’t get through a script reading without whipping it out.) And masculinity is a “construct” anyway -- if you take away war toys and baseball bats and start reading them Heather Has Two Mommies around the time they start teething, you just might keep them from being predators.

Check out one Tori Truscheit. She’s a man-hating lesbian. Really, her words, not mine. She has an article about “The Rage of All Women” in Slate. (Yes, the rage of all women. Ragier than the ragiest thing ever. And then some.)

But is it really rage? Truscheit says “the dykes I know have been crying in bathrooms and going to bed early, more riddled with anxiety than boiling over with righteous indignation. For a lot of us, the reminder that none of us is safe is an old feeling. We are tired and despairing, not newly enraged and energized.”

Well that casts rather a pall over things. But whatever it really is, Truscheit needs to expand her vocabulary to capture it, so she’s turning to what she calls the “worst thing I can be.”

We’ve reclaimed “witch” and “queer” and “dyke,” but we can’t seem to own this last, worst stereotype of ourselves. Frankly, men do not deserve this much mental sympathy, and the few who do already know it. But even as men kill women who question them daily, those of us with the least amount of investment in patriarchy are afraid to say what we really think of them.

Well, it has the benefit of clarifying things. It’s clear what she hates: men. (And “white women” and “American Fascism” and “gay assimilation” and “‘woke’ male co-workers [who] made #MeToo jokes” … actually, she hates a lot.) And we can move past the kind of blather Truscheit employs liberally throughout her piece: “patriarchy,” “the constant negotiation of public space with men,” “Cis and trans lesbians,” “women’s anger needs a heterosexual qualifier.”

And best of all, by reclaiming “man-hating dyke” for man-hating dykes, she says man-hating dykes won’t have to move to “physical lesbian separatist spaces” where they can be dykes without men around to hate (that would render the whole exercise rather pointless, wouldn’t it?) “What I mean instead is reclaiming a phrase that lets us divest from patriarchy in a more serious way,” she explains.

Ah! A more serious divestment from the patriarchy! Sounds fine. But if that doesn’t work out, I do hope she’ll reconsider the “physical lesbian separatist spaces” thing.

Let’s call him Exhibit B … Tori Truscheit talks a good man-hate game, but is she really committed? Could she work up the old bile for, say, Michael Kauffman? Kauffman has a delightfully earnest article over at Salon: “Women are leading a revolution — and it’s time for men to join.”

I say “earnest” because Kauffman displays all the humorless sincerity of an undergrad who joined the campus EarthFirst chapter because he heard hippie chicks were easy. Or maybe he really believes feminist revolution is coming and he wants to make sure he’s enjoying pumpkin spice wings as he watches the patriarchy led off to the guillotine.

The Kavanaugh nomination was a defeat, Kauffman admits. “The impact, though, is an incredible victory for women and all men who believe in the absolute right of women to live free of men’s violence. It is pure fuel that is igniting soul-searching, activism, outrage and change.” Well, it’s pure something, but it doesn’t smell like fuel.

But wait until he gets warmed up: “The key to this revolution is the ongoing leadership, strength, tenacity and sheer courage of women — exemplified in this particular instance by Christine Blasey Ford.” Yeah, the little girl voice, the memory lapses, the inability to get corroboration for a single detail of her accusation -- Thatcheresque, really.

Fifty years ago a few hundred, a few thousand, women around the world took on Goliath and now, as their ranks have swollen to hundreds of millions, the giant’s hair has been cut. Yes, he still flails around with menace and impact, but we are watching the colossus of patriarchy tumble to the ground — far too slowly, it often seems, but set against the 10,000-year sweep of male-dominated societies, such dramatic change within a few generations is stunning. This revolution is fueled by the increasing impact of those women on the lives, attitudes, and behaviors of men and boys. We overlook this change at our peril.

Yes ladies, who has two thumbs and all the correct thoughts? This guy!

It is also happening, paradoxically, because more men are discovering the price we pay for the ways we have constructed men’s power and privilege. The tight armor of manhood simply doesn’t fit most of us, although it has long given us a leg up in the world. And so, for example, we’re seeing a seismic change in men’s aspirations as fathers—yes, pushed first by women, but now enthusiastically embraced by men who don’t want to “help out” or “babysit” but to participate fully and equally as caregivers.

Kauffman’s article just goes on that way. No argument, no facts. Just sycophancy and virtue signalling. And the best part? He’s writing a whole book of this drivel. The Time Has Come: Why Men Must Join the Gender Equality Revolution is due out in January. Don’t bother pinching yourself, girls, he’s real!

Busy on Saturday? Want to learn about the “Secret Sex Lives of Witches?” Me neither, which is why I’m glad that I found this on Bust.com instead. It’s an event listed on the calendar and I would be remiss if I didn’t share.

Ritual to Hex Brett Kavanaugh
Saturday, October 20, 2018, 07:00am - 10:00pm
Please join us for a public hex on Brett Kavanaugh, upon all rapists and the patriarchy at large which emboldens, rewards and protects them.

We are embracing witchcraft's true roots as the magik of the poor, the downtrodden and disenfranchised and it's history as often the only weapon, the only means of exacting justice available to those of us who have been wronged by men just like him.

They ain’t kidding about “magik” being for the poor. They couldn’t even afford all the C -- hadda go for K-Mart disount spelling. One would imagine it’s less potent without it’s proper complement of letters, but making do with less is the so often the lot of the downtrodden.

He will be the focal point, but by no means the only target, so bring your rage and and all of the axes you've got to grind. There will also be a second ritual afterward - "The Rites of the Scorned One" which seeks to validate, affirm, uphold and support those of us who have been wronged and who refuse to be silent any longer.

There’s the rage again! They like that word. That could be part of a feminist-speak drinking game. I bet Associate Supreme Court Justice Kavanaugh would be up for it. He likes beer.

50% of the event proceeds will be donated to charity: 25% to the Ali Forney Center and 25% to Planned Parenthood.

Wait, you gotta pay to cast a spell? Why not stay home with your cats and cast your hex from the sofa? Planned Parenthood doesn't need the scratch. They’re pretty flush with government funds that they make magically resist fungibility with their baby-killing/aftermarket parts biz.

Please note that no one will be turned away for lack of funds.
Location Catland- 987 Flushing Ave, Brooklyn, New York 11206

“Catland?” I couldn’t make this up if I tried.