People were understandably horrified that he was able to fire what amounted to machine guns into a crowd. Yet similar weapons were being fired in movie theaters around the country. Three of the top five movies at the box office featured characters blasting away with automatic weapons. Two -- Kingsman: Golden Circle and American Assassin -- included so many examples of such violence that the numbers were difficult even to count.

An analysis of the top five movies in theaters the week before the attack (Sept. 22-28) showed incredible big-screen carnage, including characters firing handguns and employing a wide range of other forms of violence.

Because The Lego Movie is animated, it wasn’t included in the tally. So just four movies -- Kingsman: Golden Circle, American Assassin, It and Mother! -- featured 589 incidents of violence, including 212 incidents of gun violence. The total body count of the four was at least 192. At least 108 times, some kind of automatic weapon was used. Those guns fired so many rounds, so rapidly, an accurate tally of shots or even shooters was impossible.

To underscore that point, the Kingsman trailer was so filled with violence it is difficult to tally. This 1 minute 56 second clip shows four scenes of characters deploying several different automatic weapons, as well as pistols, a lasso and rockets.

These were the most popular films in the nation when Stephen Paddock when on his killing spree firing down on a concert crowd with what police say were automatic weapons.

Four days later, when Hollywood mogul Harvey Weinstein still thought he could bluster through a deluge of sexual abuse allegations, he declared he would “need a place to channel my anger. So I’ve decided I’m going to give the NRA my full attention.”

It was the perfect Hollywood ploy -- target the guns, not the media companies that feed them to Americans in endless streams of bloodshed.

These latest numbers from American movies give the lie to Weinstein’s faux outrage and the entertainment media’s scapegoating tactic: complain about lax gun laws, demonize the National Rifle Association and never accept the possibility that Hollywood’s glamorization of guns and violence has anything to do with the latest mass-shooting.

Kingsman: Golden Circle is the second installment in the hyper-violent, James Bond-style action franchise. Interestingly, the drug lord villain is played by none other than part-time gun control activist and full-time hypocrite Julianne Moore. Besides its 118 incidents of gun violence (70 of them with automatic weapons), there are 164 acts of other types violence in Golden Circle. There are body slams, punches, explosions, ripping off limbs, ripping out vocal cords, putting people in meat grinders, cannibalism, lasso violence, slicing people in half and eyes randomly exploding from people’s heads. The product is a grisly body count of 92. 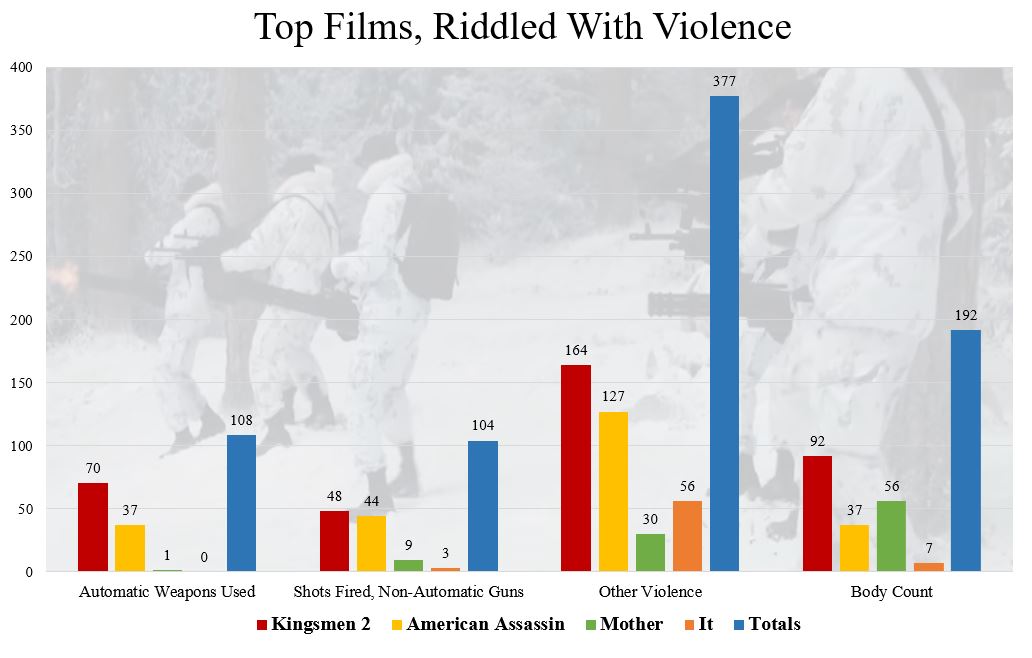 American Assassin is the story of rage-filled Mitch Rapp who wants to kill Islamic terrorists after they killed his fiancé in a beach attack. He is eventually placed in a secret CIA counterterrorism program and assigned to help stop a nuclear bomb from going off. On its way to producing at least 37 deaths, there are at least 81 instances of gun violence (37 with automatic weapons.) Realistic hand-to-hand combat scenes account for another 127 instances of violence.

The allegorical horror film Mother! Kills off 56 people with explosions, body slams, punches, people being pushed down stairs and, of course, there’s a crowd disemboweling and eating a baby. There are 10 scenes featuring guns, including one automatic weapon. The were 30 other instances of violence and the body count was a sizeable 56.

The retread of Stephen King’s It only features three scenes with guns, but the movie makes up for that with the use of a penetrating captive bolt pistol, a slaughterhouse tool used to horrifying effect in No Country for Old Men. Otherwise It offers stabbings, bludgeoning, the clown biting off the arm of a child and strong hints that the female lead is being sexually abused by her father. The total of other acts of violence was 56 with a body count of 7.

This isn’t the first time a real bloodbath has been mirrored by what’s on the silver screen. In 2013 MRC Culture study showed the five top grossing movies at the time of the Sandy Hook school shooting, generating another staggering amount of violence. 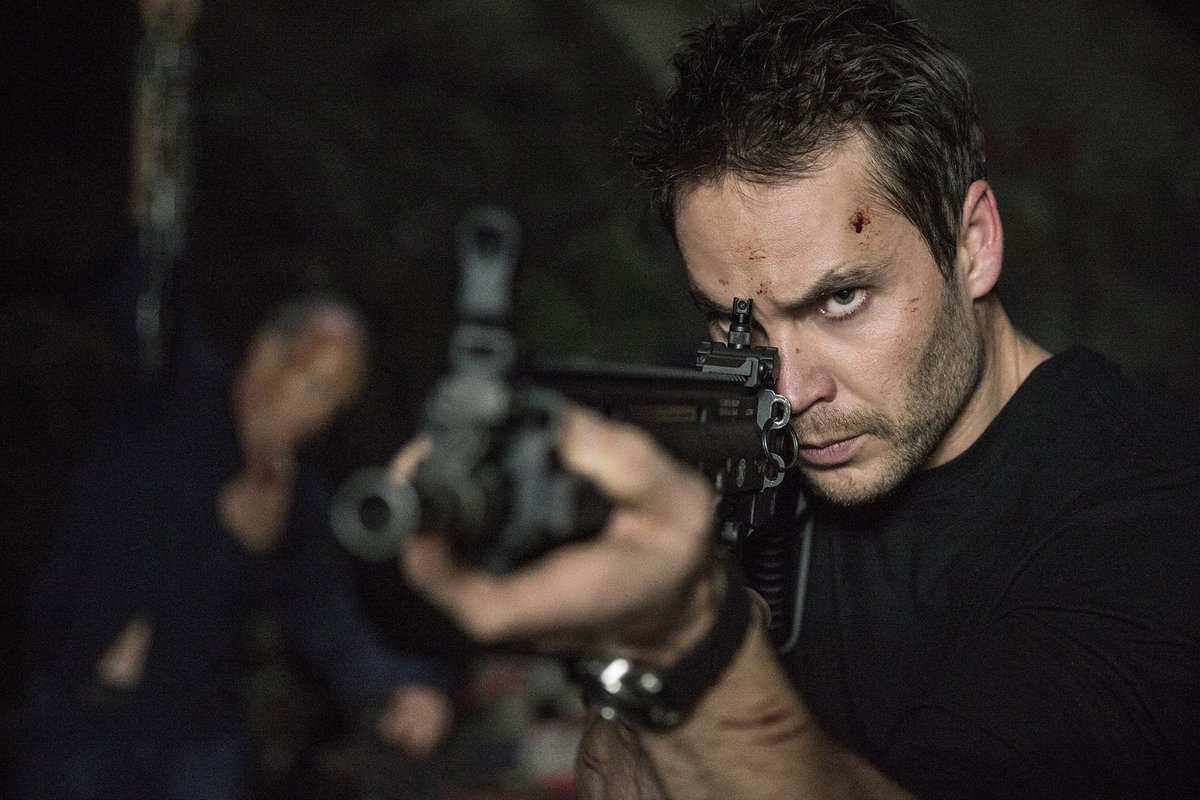 The five top grossing box office movies for the weekend of Jan. 11 were Zero Dark Thirty, A Haunted House, Gangster Squad, Django Unchained and Les Miserables. Even with the presence of the PG-13 musical Les Miserables and the spoof comedy “A Haunted House,” it was a violent, bloody weekend at the movies -- 65 scenes of violence (38 with guns) and 185 people victimized.

The standard response from Hollywood has been denial and blame-shifting. Take “pornographer of violence” Quentin Tarantino. Soon after the Sandy Hook shooting, NPR's Terry Gross asked him whether the massacre of 26 people made him lose “his taste" for movie violence, The director got angry.

“‘Yeah, I'm really annoyed,’ Tarantino acknowledged. ‘I think it's disrespectful to … the memory of the people who died to talk about the movies. Obviously, the issue is gun control and mental health,’” reported Eonline. Obviously.

But even some liberals are beginning to admit that Hollywood’s addiction to violence is unhealthy for the rest of us. Writing in the Huffington Post, Michael Rosenblum asks readers if, given the our standard entertainment fare, “are you really surprised when Stephen Paddock decides to do sort of the same thing on his own in Las Vegas? Where do you think he got the idea from?”

Rosenblum continues, “Spending five hours or more a day, every day, day after day, year after year watching thousands of people getting killed on TV, in the movies and on video games has an impact ... it inures us to gun violence. It makes it seem almost normal behavior. It instructs us.”

Then there was the Hollywood figure who in 2014 admitted responsibility for the violence on offer. “I have to just choose movies that aren’t violent or as violent as they used to be. And I know for me, personally, I can’t continue to do that. The change starts here. It has already.”

That insider was Harvey Weinstein. As Breitbart pointed out recently, the very next year Weinstein produced The Hateful Eight.