That whirring sound you hear is Walt Disney spinning in his grave, or his cryogenic vault, or whatever his final resting place really is. 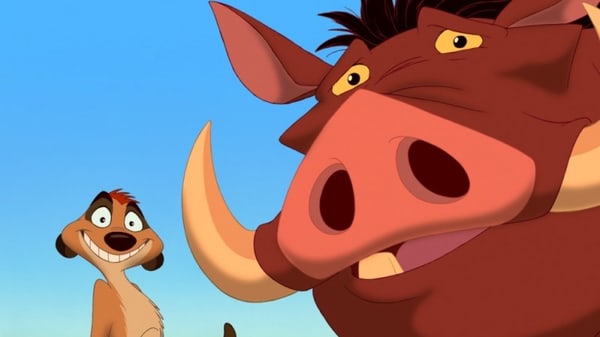 According to Jezebel, actors “Billy Eichner and Seth Rogen have signed on to voice gay lovers Timon and Pumbaa (respectively) in Disney’s upcoming ‘live action’ remake of The Lion King, according to an exclusive report from The Wrap.”

Interestingly, the Wrap doesn’t say anything about the characters being gay, so it’s possible Jezebel, a lefty-feminist site, is engaged in a bit of hopeful speculation about what it calls the characters’ “fiercely loving and judgment-free romance.”

Though Timon and Pumbaa’s dark backstory, in which they’re ostracized by the bigots in Pride Rock and prohibited from living their “life of sin” within Mufasa’s kingdom, is only hinted at in the original animated film, it’s expected that their story of perseverance and love in the face of hate will be explored in Jon Favreau’s remake.

And maybe it will. Disney is on a big gay roll. Having won props from the left for making this year’s live action Beauty and the Beast reboot the studio’s “gayest film ever,” why shouldn’t it give The Lion King a similarly fabulous makeover?

And with at least a dozen live action remakes on the slate, it looks like Walt won’t be getting rest anytime soon.