Gays and Lesbians Allied Against Defamation is the media speech police for all things LGBT (etc.). When GLAAD isn’t giving awards to CNN hosts, it’s counting how many gay characters appear in TV and movies, and demanding they be out of all proportion to the actual numbers of LGBT folks living in cities not named West Hollywood. 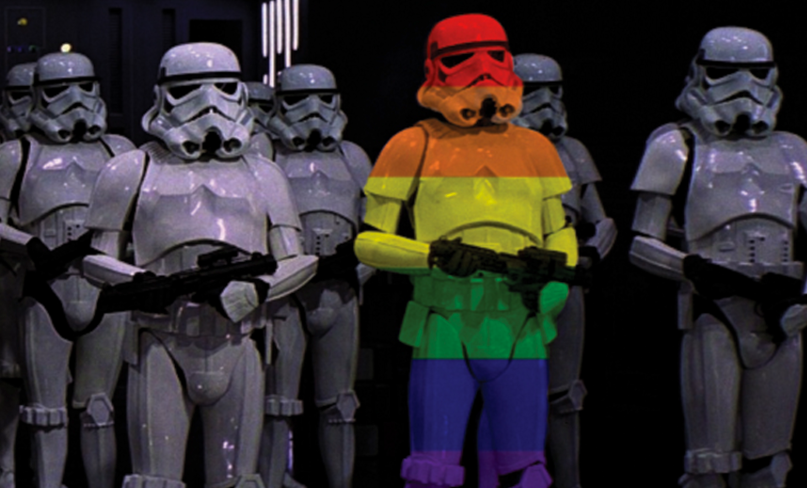 And now, according to The Hollywood Reporter, GLAAD has some dire news. It’s “Studio Responsibility Index” (Mr. Orwell! Paging Mr. Orwell!) gave Disney, Paramount and Warners Bros. failing grades. Out “of 126 releases from the major studios, only 22 of them, or 17.5 percent, included LGBT characters,” THR reported. That percentage was exactly the same as the percentage recorded in 2014.”

Hollywood's films lag far behind any other form of media when it comes to portrayals of LGBT characters," Sarah Kate Ellis, GLAAD president and CEO said in releasing the report. "Too often, the few LGBT characters that make it to the big screen are the target of a punchline or token characters. The film industry must embrace new and inclusive stories if it wants to remain competitive and relevant.

Nice studio ya have here. Shame if somethin’ was to happen to it … Oh, and if Disney thinks making kids fare gets it off the hook, the Mouse has another thing coming. “As recent successful animated films and TV programs have shown (Oscar-nominated ParaNorman, Cartoon Network’s Steven Universe), LGBT people appearing in “all-ages” programming — animated or not — is not the impossible notion it once was,” the report asserts. “LGBT people are already part of families and communities around the world, and films of all genres should reflect that.” It’s never too early to “educate.”

And a note to the adults out there who rationalize your love of super hero and space alien flicks as the last place to take the family to see old fashioned good guys vs bad guys stories: GLAAD’s wise to you. “As sci-fi projects have the special opportunity to create unique worlds whose advanced societies can serve as a commentary on our own, the most obvious place where Disney could include LGBT characters is in the upcoming eighth Star Wars film.” Understand? There will be gay stormtroopers.

Sadly, “the report said that transgender representation in the mainstream movies was ‘shockingly low.’” So if you want to see a transgender at the movies, the best place to look is in the restrooms.