Like clockwork, before anyone had time digest the horror of the latest mass shooting, the left started finger-pointing and demanding more gun control – whether it would have prevented the crime or not. From President Obama on down, they immediately began railing against the NRA and gun owners.

Not surprisingly, entertainment industry liberals were among the most vocal. That also made them among the most hypocritical. TV, movies and music videos thrive portraying – and often glamorizing – violence, and gun violence in particular. And while actors were demanding gun control, the top 10 movies in theaters this past weekend were awash in violence – 334 separate violent acts, 121 of them involving guns. The on-screen body count was 39 dead out of 142 victims.

But on Twitter we heard from the big names of Hollywood – Judd Apatow, Alyssa Milano, Minnie Driver, Patton Oswalt, Rose McGowan and Mia Farrow. Actress Julianne Moore had a nauseating Twitter conversation with Obama advisor Valerie Jarrett in which the two congratulated each other for being against gun violence.

Moore:
Thank you @vj44 for amplifying conversation on gun violence. We all must do more & creative community is committed. #StopGunViolence

Jarrett:
Thanks @_juliannemoore for lending your voice to this effort to #StopGunViolence. Please encourage others to join us

That would be this Julianne Moore. 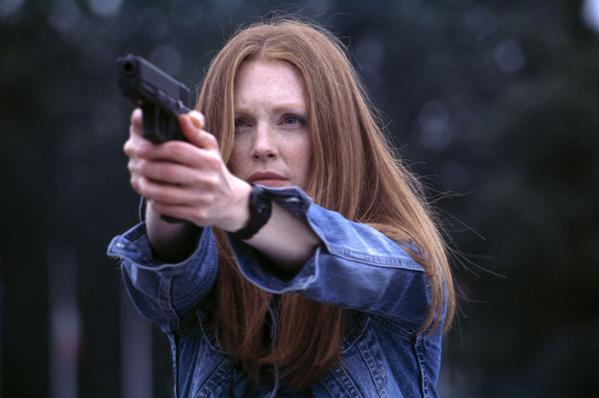 As far as we know, neither Liam Neeson nor Quentin Tarantino has chimed in this time, but we know their phony positions. Tarantino, the “pornographer of violence” would no doubt tell us “Obviously, the issue is gun control and mental health.” Tarantino’s The Hateful Eight is due out soon. It will be interesting to see if it tops the 69 victims of violence crammed into his last flick, Django Unchained.

Neeson, who’s personal on-screen body count now runs to the hundreds, would say “There’s too many [expletive] guns out there. Especially in America.” He said that earlier this year while flogging his hyper-violent Taken III. Neither Neeson nor Tarantino currently has a movie out, but Hollywood is doing just fine without them.

This time, MRC Culture analyzed the top 10 films in current release. Maze Runner: The Scorch Trials, Black Mass, Sicario and others filled the screen with at least 334 violent acts, 121 acts of gun violence and 39 dead. That’s despite the fact that Everest, The Martian and The Intern contained no violent scenes at all.

Maze Runner: The Scorch Trials led the way with at least 78 incidents of violence – mostly with teens either fighting or being the victims, and even one suicide. Crime stories Sicario and Black Mass came in close behind. Some of the scenes were so filled with violence that they were hard to count, so the number is likely far higher.

The Perfect Guy, a thriller about a woman being stalked, featured 46 violent scenes with three fatalities. Horror film The Visit took violence to a whole new, disturbing level. Not because it was graphic, but because it involved the elderly in 24 separate violent acts that claimed four lives. Even the Christian movie The War Room contained six violent acts.

Black Mass, the biopic about Boston mobster Whitey Bulger, showed 64 acts of violence, 22 of them involving guns. In one scene, Bulger (Johnny Depp) graphically shot a victim over and over at least 13 times. In Sicario the drug wars at the U.S.-Mexico border come to very graphic life. Among the 67 violent acts were 39 using guns, including a firefight in a smuggling tunnel where at least 90 shots were exchanged, and a scene in which a character shoots a man’s wife and son in front of him before killing him too. And those numbers hardly indicate the core of violence within the movie – from photos to dead bodies.

Even Hotel Transylvania 2 mustered its share of on-screen, but animated violence. But at least it contained no gun violence, which Hollywood is allegedly against.

The result is that in any given week American movie theatres are charnel houses.

But it isn’t just movies. From its obsession with serial killers to “ripped from the headlines” crime shows, TV is incredibly drenched in blood. In 2013, a week before the one-year anniversary of the Sandy Hook shooting, there were 39 gun deaths among 145 violent acts in just 14 popular shows.

More recently, when two journalists were gunned down on live TV in Virginia in August, USA Network postponed the season finale of its popular show Mr. Robot because it contained a graphic scene too similar to real life. When it aired the following week, a character shot himself on-camera, spraying blood on the window behind him.

The whole incident was shown on-screen, in graphic detail.

It would be nice for once, when a gun-related tragedy like Roseburg occurs, for Hollywood hypocrites to go off script. At the very least, they could mix some honest introspection into their demands for gun control.