Networks: Dress Codes Are ‘War on Women,’ Rioters Pelting a Woman Not

The major news networks have a double standard on what qualifies as a “war on women.”

On Thursday rioters, most of them young men at Donald Trump’s San Jose, Calif. rally cornered a female Trump supporter pelting her with eggs and other objects screaming “F**k Trump,” calling her a bitch, and spitting at her. 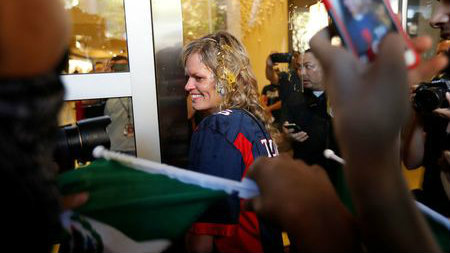 Consistency would suggest that the networks call the actual, physical attacks on the female Trump supporter a war on women. However, the networks and other liberal media are not known for their consistency on this issue.

The media has been unmitigated in its attacks on Republicans and conservatives for their “war on women.” They have bestowed the term on everything from school dress codes to the word “bossy” to time and again using it to bash pro-life politicians.

Republican politicians are accused of waging a “war on women” by pushing bills that do not require taxpayers to fund abortion and limiting access to contraception.

Similarly, Democrats and many in the media have used the “war on women’s” so-called gender pay gap in the United States as a battering ram against Republicans and conservatives. Yet even the Washington Post clarified the misleading allegation that women earn only 79 percent of men’s hourly pay.

Amid their disgust over Donald Trump’s rhetoric regarding women, liberals seem to forget that some of their own have committed the same offense. After Bernie Sanders lost the Nevada primary Bernie supporters left angry, misogynist voicemails for Nevada Democratic Chairwoman Roberta Lange, calling her a bitch and worse over convention rules that they thought gave Hillary Clinton an unfair advantage.

CBS and NBC reported on the violence calling the rioters demonstrators and protesters. ABC was a bit more honest, calling the clashes a brawl started by rioters.