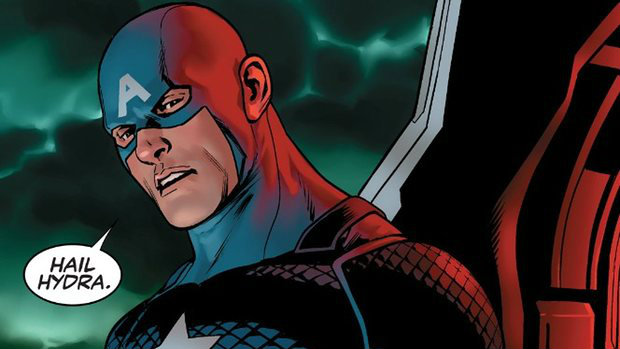 Captain America, a symbol of American patriotism for 75 years, is actually just an undercover Nazi with Hydra, the organization he has been fighting against for decades, says Marvel Comics.

“Steve Rogers: Captain America #1” dropped a bomb on the comic book world on Wednesday (just before Memorial Day) with a shocking and rather tasteless plot twist planned since late 2014.

Yet Tom Brevoort, executive editor of Marvel Comics insists it is indeed the real Captain America and it will not be easily explained away.

"It's not a Steve from the universe next door, it's not a clone, it's not a robot, it's not mind control," Brevoort said.

Brevoort said he thinks the new story reflects the mood of the nation.

"We're currently in the middle of this very contentious presidential primary season where folks across America are feeling divided on a number of issues," Brevoort said. "This feels very much, at least to me, like it's of the zeitgeist of the moment."

Yet the twist is unpatriotic in many ways, and one would be hard-pressed to find a single tweet saying otherwise.

#SayNoToHYDRACap Is...Is this real? Really? This goes against everything the character stands for!

Cap is 1 of the purest characters in the marvel universe who fights for good against bullies, & you turn him into a nazi? #SayNoToHYDRACap

It's incredibly disrespectful & erasive to take the invention of two Jewish writers and turn him into a white supremacist. #SayNoToHYDRACap

#SayNoToHYDRACap because even if its a reversable plot twist, its still disrepectful to cap and his creators, and has dealt serious damage

Spencer said he was not surprised by the response. “The worst thing that could have happened today is people shrugging, or even being reasonable … this is what we wanted, we just have even more of it than we imagined.”

He added that he realized making Steve Rogers a Hydra plant would do the most damage out of all the characters.

“The eternal divide is the reader wants the character to succeed, to be happy, to win,” Spencer remarked. “Our job is often to put the characters through things and that can often be mistaken for a lack of respect or care for the character.”

Even Chris Evans, who plays Cap in the Marvel movies pushed back against Hydra Cap, putting even Spencer on edge.

Oh god what have I done https://t.co/sHmaFhz5my

Brevoort admitted the twist was partly to "see if you're paying attention and make readers long for the next issue."

"This is a bigger story than it seems," Brevoort said. "Hopefully we've got this figured out. If not, you're talking to me on the day I broke Captain America."

The move comes on the heels of "Captain America: Civil War," Disney’s 10th billion dollar film, which hit theaters May 6.