That Beyonce released her politically charged song, “Formation,” over the weekend is one thing. That the NFL allowed her to perform it at the Super Bowl halftime show on Sunday was quite another..

The singer used the Super Bowl, the most watched TV event of the year, as a platform for her controversial message: that racism against blacks in the United States has led to white on black violence, especially by corrupt law enforcement. 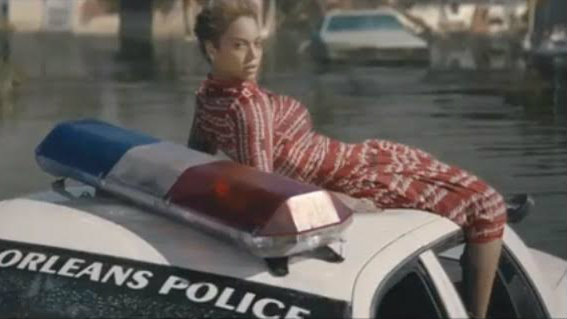 “Formation” is a tribute to the violent Black Lives Matter movement, which gained ground in 2015 and continues to disruptively protest what it calls injustice towards blacks especially by police.

TV screens around the nation showed what looked like a call for violence by Beyonce in response to the abuse, real or imagined, of black people.

The internet., especially Twitter, blew up over the profanity-laced music video, which shows the singer sinking a police car and contains many references to black slavery and the modern conflict between law enforcement and blacks.

Police in riot gear face a little black boy in a hoodie with his arms up, an image that recalls the black community’s claims, some of them later dispelled, that unarmed, non-violent blacks including young teens are shot by prejudiced police.

Beyonce and her dancers’ costumes were even reminiscent of the Black Panthers, a black militant organization known for its violent tactics, including torturing its own members.

This message can only exacerbate an already dangerous state of affairs between blacks and whites in the United States. Violent protests have escalated since the death of Michael Brown, an unarmed teen who was shot to death in Ferguson, Mo. in Aug., 2014.

A year and a half later, Beyonce, an enormous pop star whose husband, Jay Z will donate $1.5 million to the Black Lives Matter movement is spreading a message that seems to ignore or lose sight of the end goal, peace.

If Beyonce intended to solidify Black Lives Matter’s association with violence she may have succeeded this weekend.

Where is the peaceful but firm discourse that Dr. Martin Luther King Jr. called for on the difficult issue of American racism?