Emma Stone, set to play lesbian tennis star Billie Jean King in the film Battle of the Sexes, compared King to Hillary Clinton – and the parallel ended up failing miserably. 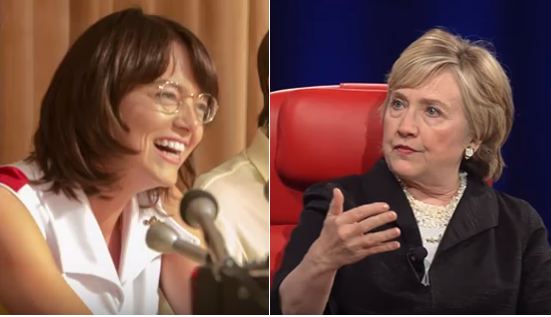 The movie is about a famous 1973 tennis match when King bested braggart and showman Bobby Riggs – who had claimed no woman could beat him – at the Astrodome in Houston.

In an interview with Vanity Fair’s Julie Miller, Stone compared King to Clinton:

It was very interesting to see this guy — this narcissistic, self-focused, constantly stirring-the-pot kind of guy — against this incredible, qualified woman . . . Obviously, the way this has all panned out has been fascinating and horrifying, and it still makes me feel like we’re in a bad dream, but those parallels make sense to me.

Miller added, “Hillary Clinton seemed as though she had a legitimate shot at winning her own battle of the sexes and becoming the first female president of the United States … But then Donald Trump became president.” Because, ESPN notwithstanding, politics is very different than sports.

Stone also did a recent interview with OUT Magazine, along with Andrea Riseborough and Billie Jean King herself. After a lengthy discussion lamenting the injustice of the wage gap (note, Stone is worth $18 million, while King is worth $16 million) Riseborough made a similar parallel, this time comparing Clinton to Cleopatra: “Sometimes I feel like [women] have a long way to go. It is so important to think about what happened before, and there was a lot of strength before. Cleopatra was quite a long time ago, but Hillary didn’t get in.”

Yet these parallels fail miserably. Clinton did not lose the 2016 race for the presidency because of institutionalized sexism – she lost because Americans believed she was a weak candidate, indeed, an untrustworthy candidate. On the election, the Chicago Tribune noted: “Partly, ideology and policy overcame any gender solidarity,” noted the Tribune, “…Fatally, she was the all-too-familiar face of the establishment.”

And the Chicago Tribune is spot on. CNN exit polls revealed 88 percent of Republican women voted for Trump, and 50 percent of Trump’s voters cast their ballots in his favor because they ‘disliked his opponent,’ while 81 percent found Clinton ‘unfavorable.’ 61 percent of American voters also answered ‘no’ when asked whether they found Clinton trustworthy. When asked whether they would feel excited, optimistic, concerned, or scared if Clinton were to win, most answered ‘scared’ and, in another poll, ‘negative.’ 63 percent of American voters reported Clinton’s use of private email bothered them. Most American voters reported a candidate’s ability to bring change was most important to them, and of this contingent, 82 percent voted for Trump.

Clinton lost to Trump in a match just as memorable, though not nearly as motivated by sexism.