On Friday, more than 100,000 Americans are expected to march in the nation’s capital to celebrate life and condemn abortion. While the networks often overlook the March for Life, it exemplifies the strength and youth of the pro-life movement – something one leader wants the Canadian prime minister to grasp.

“An organization that has the explicit purpose of restricting women's rights by removing rights to abortion is not in line with where we are as a government, quite frankly where we are as a society,” Trudeau declared Wednesday during an Ontario town hall.

Campos-Duffy and Kilmeade turned to Mancini for a reaction. She stressed that he was “out of touch.”

“He doesn't need to look far to see that eight out of 10 Americans for the last 10 years have wanted to limit abortion more than it’s limited, at least in the United States,” Mancini responded, likely citing a Marist/Knights of Columbus poll.

To see for himself, she invited him to the 45th annual March for Life held later this month, on Jan. 19.

“I’d love to extend an invitation to the prime minister to come to the March for Life on Friday, because he will see who’s really out of touch with mainstream America,” she continued.

Held in Washington, D.C., the March for Life condemns abortion around the anniversary of the Supreme Court’s 1973 Roe v. Wade decision, which legalized abortion in this country. Regardless of the weather, the march regularly attracts tens of thousands to hundreds of thousands from across the country.

For her part, Campos-Duffy found Trudeau’s comments “ironic” because the March for Life is a “young movement” as well as a “pro-science movement.” Mancini agreed. 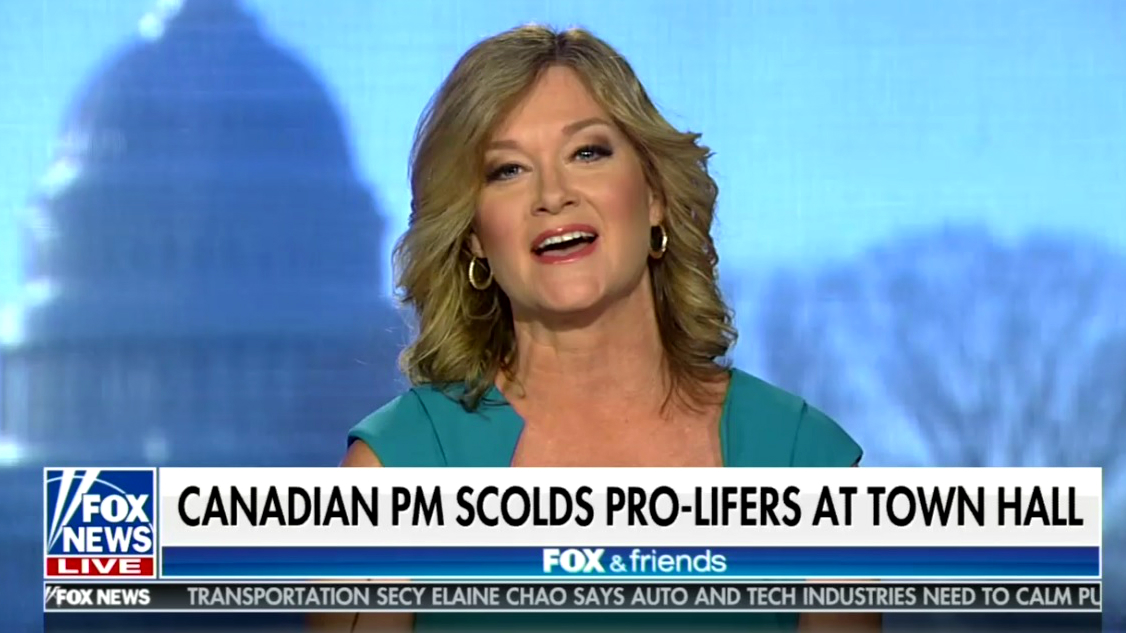 She went on to urge that the March for Life, the "largest human rights demonstration that happens annually around the world” is “45 years strong.”

“It’s astounding when you consider that we’ve lost over 60 million Americans to abortion,” Mancini concluded. “And to the prime minister, I just would really want to talk to him about, this is the most significant human rights abuse of today.”

Before Mancini went off air, Campos-Duffy added that the event and the marchers “get the coverage they deserve at that event, media-wise.”

In years past, the three broadcast networks have given embarrassingly small coverage to the event.