New Museum of the Bible Is Also a Museum of Humanity

At a time when entertainment media routinely mock Christianity, a new museum is standing out by celebrating the Bible’s influence on America, in the world and in the media. The building houses everything from a page of the Gutenberg Bible to Elvis’ Bible.

The new Museum of the Bible promises visitors the “history, narrative, and impact” of the most popular book in the world. But, in doing so, it also reveals a history of the human race -- a world that has been transformed by God whether it believes in Him or not.

The $500-million, tech-savvy museum located in the heart of Washington, D.C. opens Friday, Nov. 17. The free admission is perfect for visitors who want to visit repeatedly (it reportedly takes nine days to experience everything in the museum). Video below.

Following a media preview, Steve Green, chairman of the board and president of Hobby Lobby, spoke on the relevance of the Bible for today’s Americans.

“It’s foundational to our government. There are many principles this nation was built on that many people today may not even understand,” he told MRC Culture. “The idea that all men are created equal, that is where our Founders got that. So our freedoms, our economic system, our political system, many of those are built and influenced by the Bible and many people today don’t know that. And we want people to understand that.”

After media entered through the massive, 37-foot Gutenberg Gates, the museum staff in the lobby happily pointed out that every aspect of the museum had a purpose -- beginning with the floor with stone imported from Israel. As visitors walk into the museum, dark gray tiles decrease and white tiles increase, symbolizing a passageway from darkness into the light.

But the “digital arcade ceiling” also begs attention, as designs and sceneries play across across “one of the largest horizontally mounted digital screens in the U.S.” 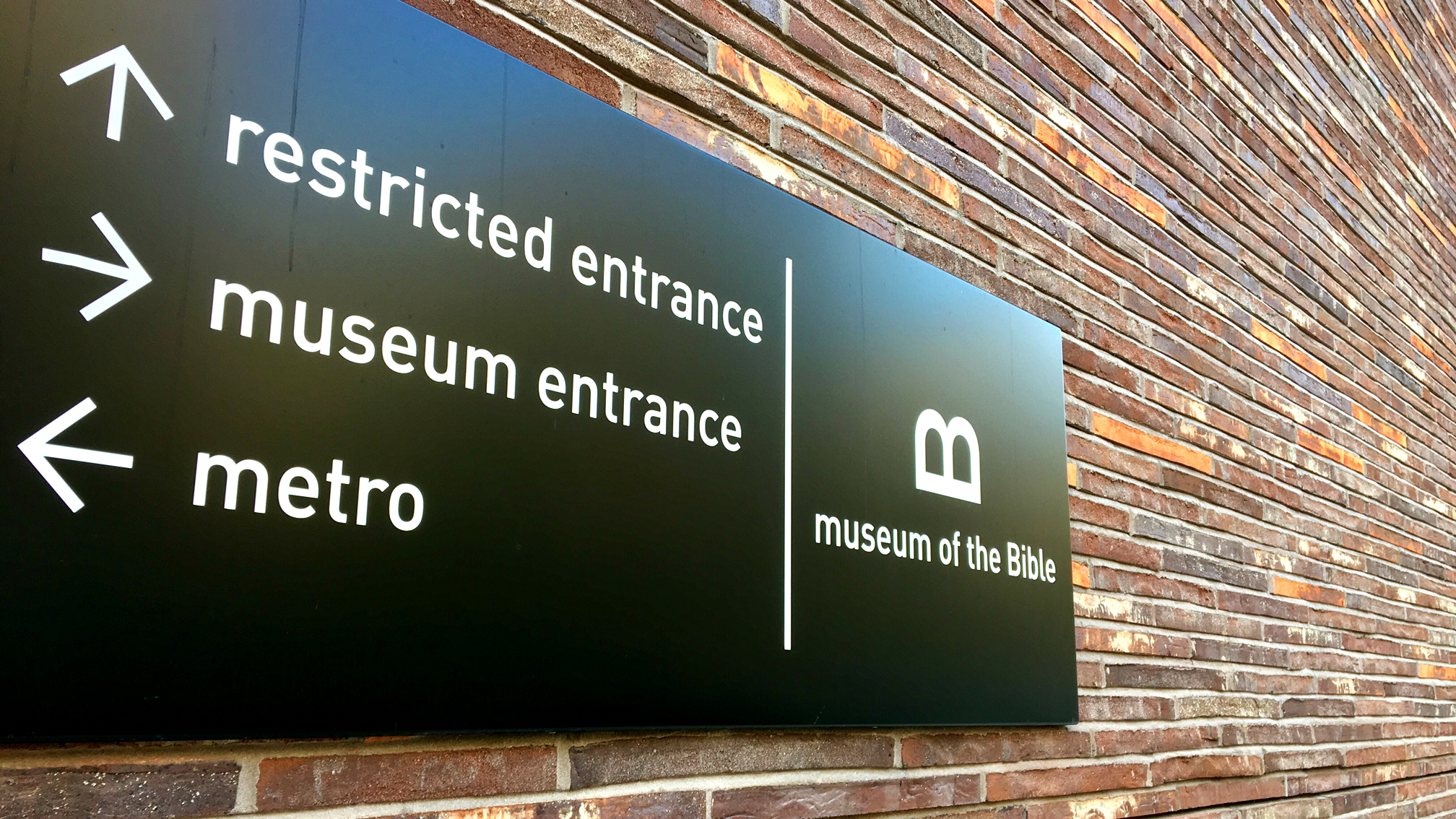 The entire museum flows with music, including the elevators, where scenes from Israel play (if you look closely, you’ll spy a hummingbird one staffer called “Hazel”). Or if visitors prefer walking, there’s the “Stairway to Heaven.”

The fourth floor housed the “history of the Bible.” The exhibit demonstrated how the Bible changed from “handwritten scrolls to manuscript codices, to printed books, to mobile devices.” It holds more than 600 artifacts to show how versions of the Bible reached those in different times, in different cultures, of different ages (children’s Bibles) and even of different senses (braille Bibles).

Treasures included 200 Torah scrolls from the 17th through 19th centuries, a “Noble Fragment” of the first edition of the Gutenberg Bible, a sixth century Aramaic translation of the Gospels (part of the Codex Climaci Rescriptus) and a Bible signed by Martin Luther.

The third floor featured the “Narrative of the Bible,” beginning with the Hebrew Bible. An immersive walk-through with voices, video, lights and sounds leads visitors through the story of the Old Testament, beginning with God’s creation, Adam and Eve and Noah (walk a rainbow-lit room) to Abraham (see the “countless stars”), Moses (walk from a “burning bush” through parted “waters”) and King David.

“The New Testament” section consisted of a wrap-around screen telling the story of Jesus and the early Christians with video. “The World of Jesus of Nazareth” rooms re-created a first-century village, including a synagogue and view of the Sea of Galilee.

Down one level, the second floor housed the “Impact of the Bible” in the world, in America and in Washington, D.C.. The exhibits showed the Bible’s influence in countless areas of life including art, charities, education, government, literature, music, science, language time, and even fashion.

Fashion displays included a Dolce & Gabbana dress that singer Katy Perry wore in 2013 of Byzantine Mary and “Crucifix Pumps” by Versace. Other displays included a wall of Madonna and Child art, a list of Shakespeare references to the Bible, and notes on the censorship of Bibles by the USSR and the Torah by the Nazis. 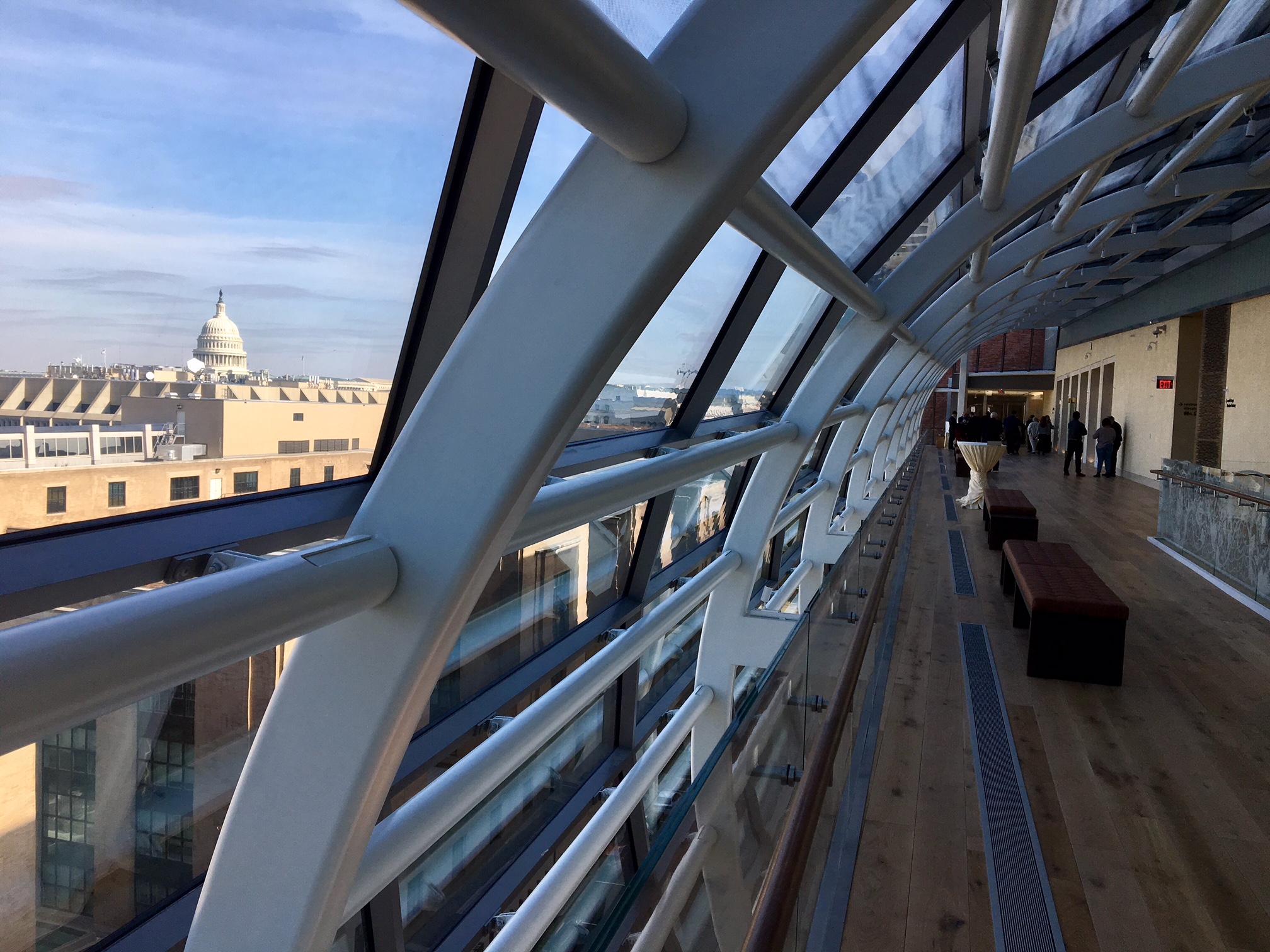 But the “Bible in America” display began with an excerpt of the Mayflower Compact, original printings of letters by the Founding Fathers, a replica of the Liberty Bell and Martin Luther King Jr. original books.

The section also included Bibles of the Revolution and explained the Bible’s role in the Declaration of Independence and Constitution. The museum also pointed out how the Bible was used to subjugate slaves and then condemn slavery, as well as how The Woman’s Bible challenged verses about women and, then, how the Bible was used as a part of the suffrage movement.

The museum also welcomed toddlers and children with a “Courageous Pages” educational play area near the lobby, with everything from learning about other “Young People in the Bible” to “David and Goliath” game where children can throw “soft ‘stones’ at a mobile Goliath target.”

The top floor houses a cleverly-named “Manna” cafe attached to a 3,000-square-foot biblical garden. And then there’s the glass hallway that boasts view of the Capitol at one end, and the Washington Monument at the other.