Following the horrific Las Vegas shooting, the media are applauding the heroism of officers who endangered themselves to save citizens.

Along with her husband, Gail Davis attended the Las Vegas country music concert where a gunman ruthlessly killed at least 58 and injured more than 500 on Sunday night. Surviving what media reported as the deadliest shooting in U.S. modern history, Davis told CBS This Morning she owed her life to a police officer who acted as her "guardian angel."

"Gail, I can't imagine how you are feeling at this second," she began. "What can you tell us about what you saw what happened?"

Still in shock, Davis revealed that she originally went with her husband to see her "favorite singer" Jason Aldean perform.

"He sang about five songs and all of a sudden we just heard like three or four little pop, pop, pop and everybody kind of looked around and said, 'Oh, it's just firecrackers,'" she remembered. "And then we heard pop, pop, pop, and it just kept going and going, and my husband said, 'That's not firecrackers. That sounds like a semi-automatic rifle.' And then everybody started screaming and started to run."

At her location, Davis stressed she could have been a victim herself after watching one young woman beside her collapse.

As she saw "people getting shot and people falling," her husband warned her, "We gotta get out of here. We’re going to get shot." That’s when they ran towards the concessions stands and Davis met the "Metro officer who I owe my life to." 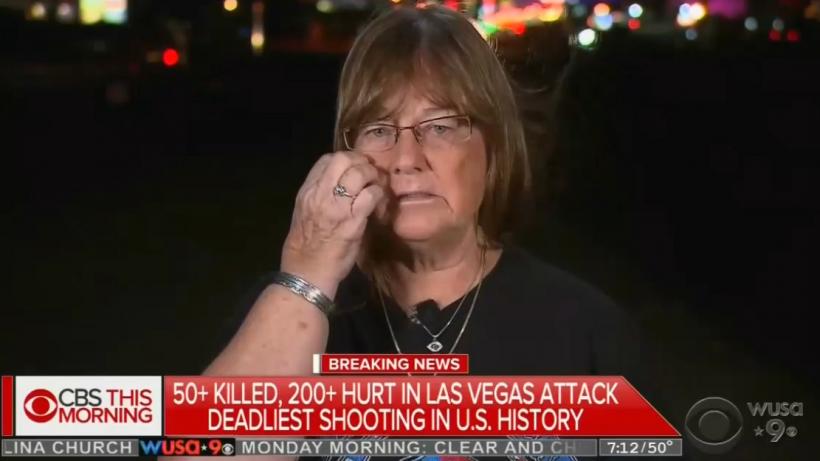 He grabbed the couple, beckoning them to "Get in here."

"We went running in there, and he said, 'Get down.' And so we got down," she said, along with another two ladies trying to hide. "And the officer actually covered me up to protect me from being shot because I couldn't get out all the way."

Each time they thought the shooting finally ended, the gunman began firing again.

"You could hear the shots just, like, going back and forth and ricocheting, and then they would stop, and then we thought, 'Okay. It's over,'" she added. "And then it would start again."

At one point, the officer went out "to look around" with his gun. But as soon as the shooting resumed, he came "running back" to protect her.

When the gunman took time to reload, Davis said the officer moved them to safer tent. "He was like my guardian angel, he never left me," Davis said.

But the shots became louder and her husband, she said, was hit with shrapnel.

Again, the officer urged, "We need to get you out of here. But stay low." She remembered he had to push down a door in the back for them to escape.

He advised them to "stay out of the light" and "just run. Just run and keep down."

"And as were running, there's people laying everywhere," she said of the scene as she started to tear up. "People were bleeding. One guy was holding his girlfriend or wife or woman. And he was crying and saying, 'Oh God, baby, I'm so sorry. I'm so sorry. It's my fault.' And I think she had been shot in the head, 'cause he was covered with blood."

"And we ran, we ran," she added. "And there was just ambulances and police cars everywhere. It was heartbreaking. It was unreal."

At that point, King chimed in:

"Gail, you are painting an incredible story. I am so sorry," she said. "We’re all sorry you had to go through something like this. It sounds absolutely terrifying."

After the horrifying event, Davis hoped to find the officer who saved her.

"They’re always right there, you know? Metro is such an amazing police force, and they were right there," she said. "There were police cars everywhere, and the police officers were helping, the other concert-goers were helping everybody. It was just amazing. We all came together, and everybody was helping everybody. It was wonderful to see, and I just love Metro. I'm just so proud of them."

King agreed, "A lot of people are giving big kudos to the Las Vegas police department."