Hollywood couldn’t be clearer in its position on abortion: Three different films are slated to tell the story of an illegal abortion network. And the latest one boasts an actress who just won big at the Emmys.

After winning two Emmys Sunday for her role in Hulu’s The Handmaid’s Tale, Elisabeth Moss signed on to star in yet another production focused on “reproductive rights.” Moss will appear in the upcoming (pro) abortion drama, Call Jane.

From the sounds of it, the film will make the case for Roe v. Wade, the 1973 Supreme Court decision that legalized abortion in the United States.

“Set in 1960s Chicago, Call Jane focuses on the true story of an underground network of suburban women who secretly provide safe abortions for women in need pre-Roe v. Wade,” The Hollywood Reporter broke the news.

Moss’ character, Jane, is a “married woman who is unexpectedly pregnant and discovers the underground group of women.”

Production for the indie film is set to begin 2018. But this isn’t the only abortion film in the works. Hollywood (with some help from Planned Parenthood) is planning two additional films, Ask for Jane and This is Jane, based on the same illegal abortion network. 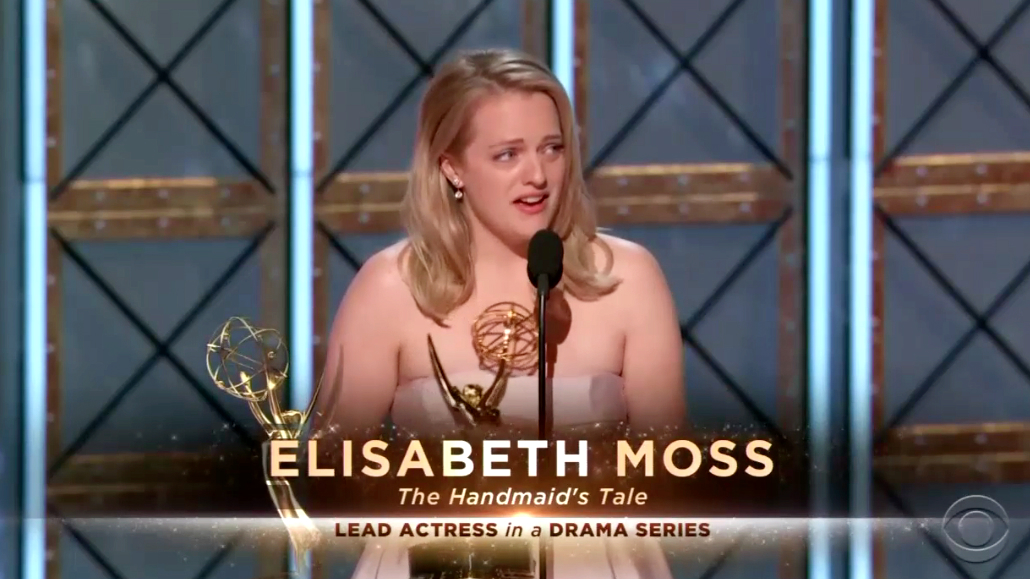 “Both projects are based on the historic true story of the underground abortion network in Chicago created by college called The Jane Collective,” Deadline reported in July, “which helped over 11,000 women get illegal abortions in Chicago between 1969 and 1973 before Roe v. Wade allowed legal abortions.”

“This script [for Call Jane] is commercial and entertaining, but it’s also really relevant to what is going on with the world today,” Brenner told THR. “Women’s rights are important and no one should have the right to control a woman’s body. And that such an idea can be challenged today and that we can go back in time on these issues is scary.”

His comments sounded eerily similar to the media’s philosophy behind The Handmaid’s Tale, which reviewers likened to “Trump’s America.” Based on the 1985 novel by Margaret Atwood, the story takes place in the Republic of Gilead, a reimagined United States conquered by Christian fundamentalists. The show follows a woman named Offred and her fellow “handmaids” as they are forced to bear children for the upper class.

According Atwood in a Teen Vogue interview, Gilead proved even better than America. When the magazine asked if Atwood saw Gilead as a “metaphor for other places, other times,” she responded yes. She elaborated:

For instance, Ceauçescu’s Romania, where he tried to enforce mandatory childbirth with pretty horrible results because he forced childbirth upon women who could not then afford to support the baby. And I have to look at this, you know, because that’s what the Trump regime has just done. Defunding health care for pregnant women. Gilead would be better than that. At least they’re getting adequate food. I’m not kidding.

In an August interview with host Tavis Smiley, Moss made similar comments.

When Smiley asked about the “parallel between the story, what the story’s about, and the maltreatment and disrespect of women” of women today in regards to President Trump, Moss responded:

I feel like it is – it is impossible to not draw the parallel, and I think we should draw the parallel. I mean, that's one of the wonderful things about art and literature, is it can bring out things that you feel passionate about. And I think for that, you know, for – sometimes my response to this kind of thing is, you know, there was this sort of this, kind of a right-wing kind of people saying at one point that we were this left-wing propaganda show, and that it was 'anti-Trump' and all of that, and I kind of think, well, you know, listen, it's about – it is about what it is, it was written 30 years ago, it's about ignorance, it's about stupidity, it’s about evil, it’s about taking away women's rights and human's rights. If you happen to draw the correlation between [laughter] that and now, that’s on you.