UPDATE: Following this story's publication, OkC removed its Medium post. This post has been updated to reflect that below.

One of the most popular dating apps is filtering its users by support for Planned Parenthood, because a “shared cause is sexy” even when it’s America's largest abortion provider.

“Connect over a shared cause!” one ad read on the website Sep. 11. “With the new Planned Parenthood badge, you can show your support and find other supporters who care about the same things you do.”

In a Medium article posted by the dating service, OkC revealed that it partnered with Planned Parenthood to help daters find each other because a “shared cause is sexy.” To have the badge placed on their profile, daters must declare support of government funding for the abortion giant:

The badge will read ‘#IStandWithPP’ and will be prominently displayed on the profile of every OkCupid member who has publicly responded ‘no’ to the question ‘Should the government defund Planned Parenthood?’ And that’s a lot of people; over 80% of respondents have said ‘no’ so far, and the question is garnering hundreds of new responses every day.

While more than one million install the OkC app per week, it’s anyone’s guess as to how many users answer that particular question.

But the badge has at least one outspoken fan: anti-Trump comedienne Chelsea Handler.

“This partnership was a no brainer for me,” Handler said of OkC and Planned Parenthood teaming up. “Personally, I would never date anyone who didn’t support Planned Parenthood, so I loved the idea that OkCupid is doing their part by giving people a place to connect on topics that matter.”

The feeling was mutual, according to OkC.

“OkCupid’s partnership with Planned Parenthood is really exciting because it enables us to help people connect on the issues that matter to them. In this current climate, this matters more than ever when it comes to finding ‘your person,’” Melissa Hobley, the CMO of OkC, insisted. “We know that Planned Parenthood is driving conversations, support and education that millions care about. When we looked at the data, we saw that our community on OkCupid was talking about Planned Parenthood, so we decided to make it easy to find the folks who cared about the same thing.” 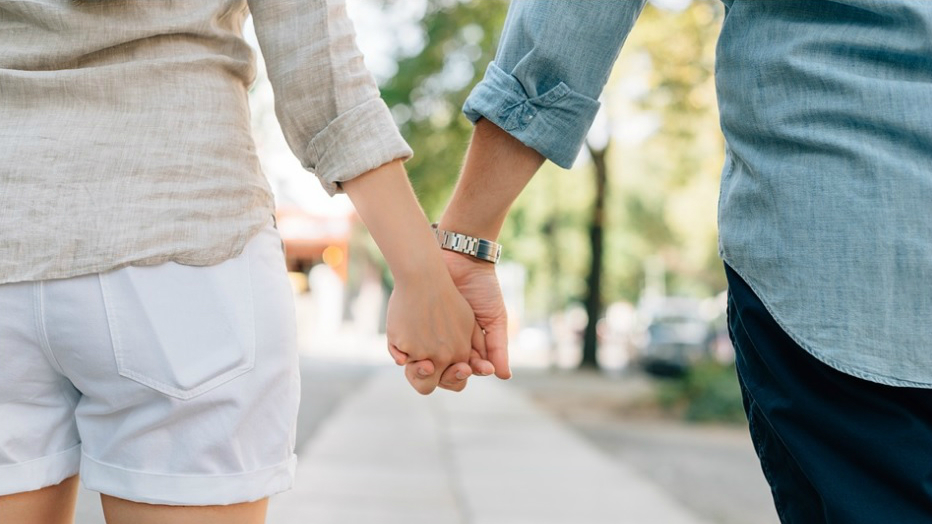 To do that, OkC is focusing on everything down to the very algorithm.

“Responses to our iconic questions, like the one on Planned Parenthood, have always worked to inform our high-tech algorithm,” the Medium post read. “But throughout this partnership, the Planned Parenthood Badge will make it even easier for supporters to start a conversation: not only will the badge highlight their support, but our algorithm will also recognize the badge and use it to promote like-minded daters to one another.”

In other words, OkC added, this could “be just the thing that makes someone give your profile a second glance.” To top it off, OkC announced that it would “we share sex & dating tips from Planned Parenthood over the next few days” on Instagram.

No word on whether or not OkC would also provide a pro-life filter (#IStandWithBabies). Unlikely.

This isn’t the first time the dating community has expressed support for Planned Parenthood. Earlier this year, to the applause of many in the media, dating app Bumble raised $50,000 for the abortion giant.

After this story was published, OkC deleted its post from Medium Sept. 12. Screenshots are located below. 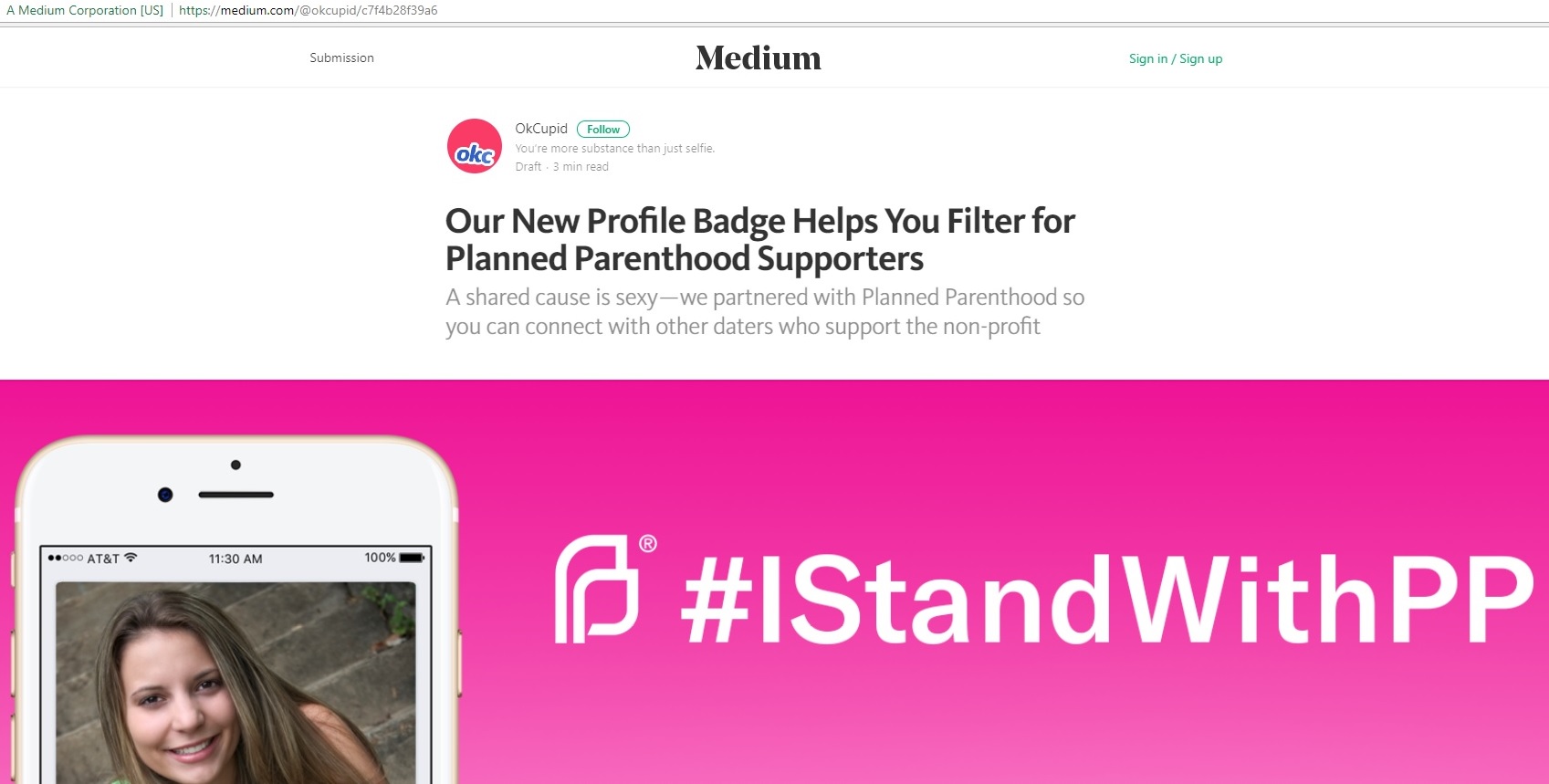 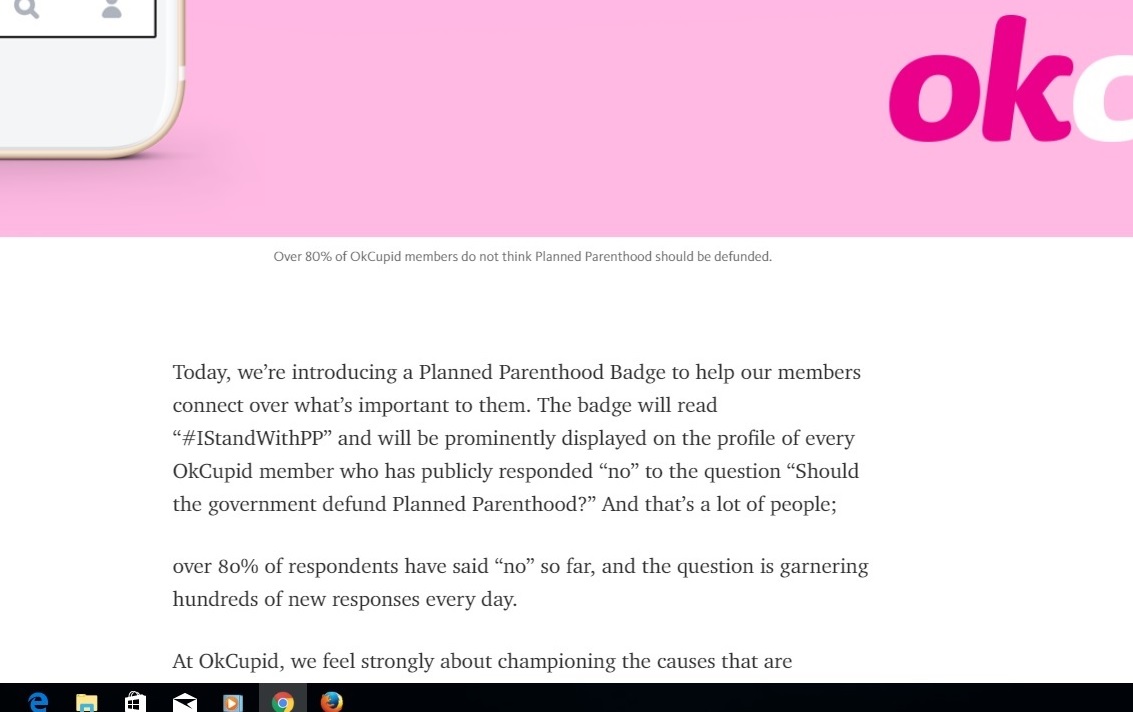 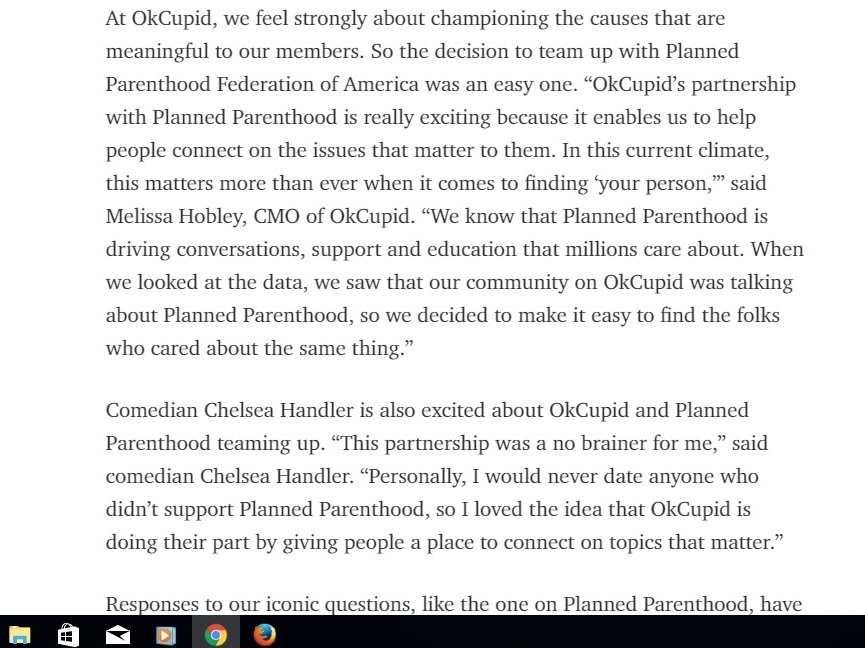 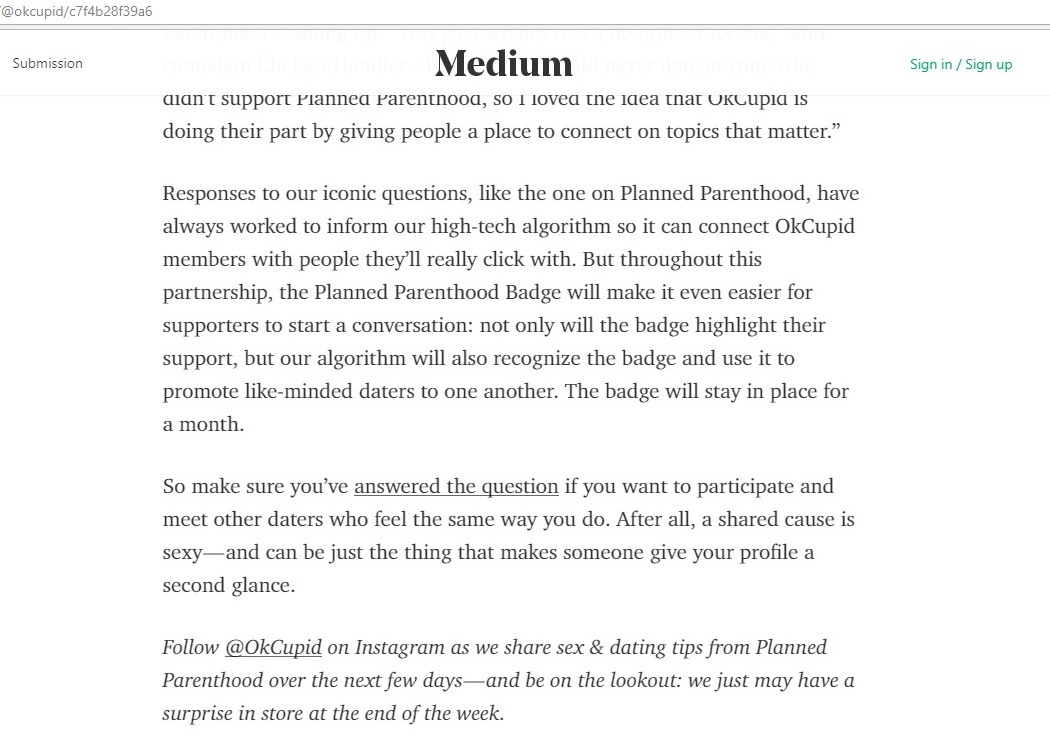