While the three broadcast networks have resumed coverage of British infant Charlie Gard, their reporting is lacking: only NBC has covered the recent efforts to grant Charlie and his parents permanent residency in the United States.

And while ABC (unlike CBS and NBC) covered Charlie’s case several times this week, its reports have painted the case as a “battle between parental instinct versus medical reason."

Last week, Judge Nicholas Francis of London’s High Court revisited the case of the 11-month-old baby on life support in light of “new evidence.” For the hearing, Charlie’s parents, Chris Gard and Connie Yates, were allowed two days to compile evidence that their son should stay alive in order to receive U.S. experimental treatment. They accomplished their mission: although they walked out after the judge misconstrued their words, U.S. Doctor Michio Hirano testified that treatment could provide Charlie with “meaningful improvement.”

As an infant, Charlie was diagnosed with a rare genetic condition, mitochondrial DNA depletion syndrome, and could be removed from life support any day. While America’s major networks initially kept quiet on Charlie’s story, the President Donald Trump’s tweet of support changed that – pushing the story into a national spotlight.

But the coverage is still wanting. During the Wednesday morning’s news shows, all three broadcast networks provided updates on Charlie, but only one admitted the recent efforts by congressmen to grant Charlie U.S. residency.

During Today, NBC co-anchor Savannah Guthrie provided an “update on a story we've been following for several weeks.” (“Following,” that is, very intermittently.)

Charlie, she revealed, “has reportedly been granted U.S. citizenship” which could “pave the way for him to travel to America to receive experimental treatment.”

While a little off, ABC came closer to reporting the story than the other two networks. Guthrie likely referred to a U.S. congressional committee voting unanimously Tuesday on an amendment to grant permanent residency to Charlie and his parents.

While London's Great Ormand Street Hospital would have to allow Charlie to leave first, the amendment "would speed up the process, cut through the bureaucratic red tape" for U.S. medical treatment, according to Congresswoman Jaime Herrera Beutler (R-Wash.) who introduced it. The amendment still needs a vote from the House and the Senate to become law.

We just passed amendment that grants permanent resident status to #CharlieGard and family so Charlie can get the medical treatment he needs.

At the same time, Rep. Trent Franks (R-Ariz.) and Rep. Brad Wenstrup (R-Ohio) also proposed legislation that would grant Charlie and his parents lawful permanent status in the United States.

While ABC and CBS covered progressions in Charlie’s case, they didn’t mention the U.S. legislation.

For Good Morning America, foreign correspondent James Longman instead focused his Wednesday morning report on a U.S. doctor from Columbia University examining Charlie as a candidate for experimental treatment.

“Dr. [Michio] Hirano has said that he believes that there’s a 10% chance that Charlie's muscle strength could improve,” he reported. (CNN reports, however, that he actually said a “11% to 56% chance.”)

While the treatment hasn’t been tested on animals yet, Longman stressed that a “child in Baltimore has undergone similar treatment.”

“His condition did improve slightly,” Longman added, “but it has to be said Charlie's condition is a lot more severe.” He concluded that the “different competing clinical perspectives will be compiled into a report” delivered to the judge Thursday. 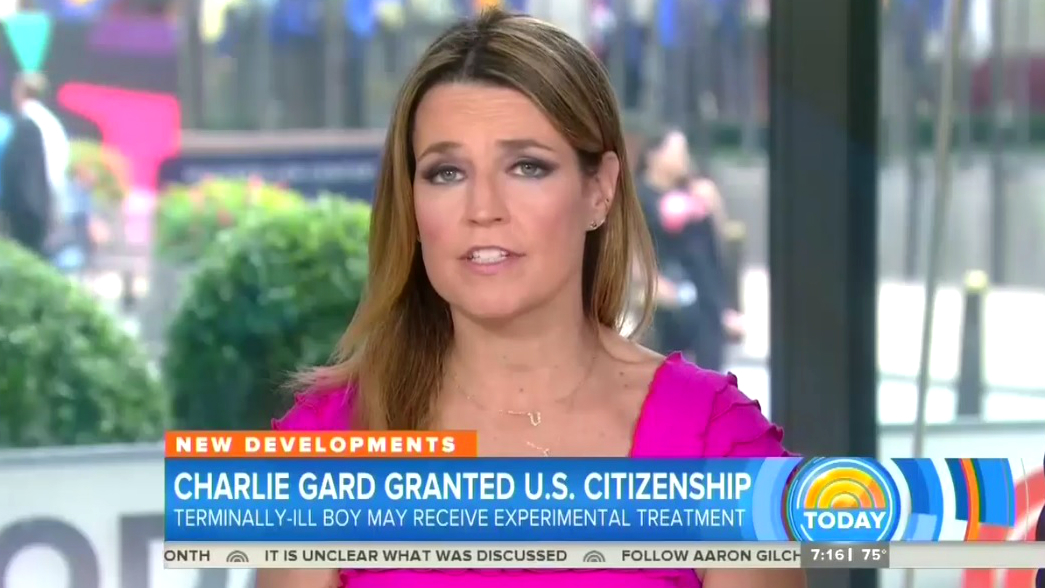 While credit goes to ABC for covering Charlie multiple times this week, its coverage has been far from perfect. During Monday’s World News Tonight, Longman described the situation as "a battle between parental instinct versus medical reason."

Last but not least, for CBS, fill-in host Bianna Golodryga reported on a story from The Telegraph that “doctors caring for Charlie Gard seem to be unconvinced after meeting with a U.S. neurosurgeon,” or Doctor Hirano.

“British doctors believe he suffered irreversible brain damage and his life support should be withdrawn,” she added. “But Doctor Michio Hirano of Columbia University says his experimental therapy could help.”

None of the network news shows have provided updates since Wednesday morning.