Pregnant Teen ‘Disciplined’ By School Tells CBS: ‘I Made the Right Choice’

It’s a radical move for the media that positively spin abortion, but that isn’t stopping CBS: the network just covered the story of a pregnant teenager who refused abortion for her baby boy – no matter the cost. 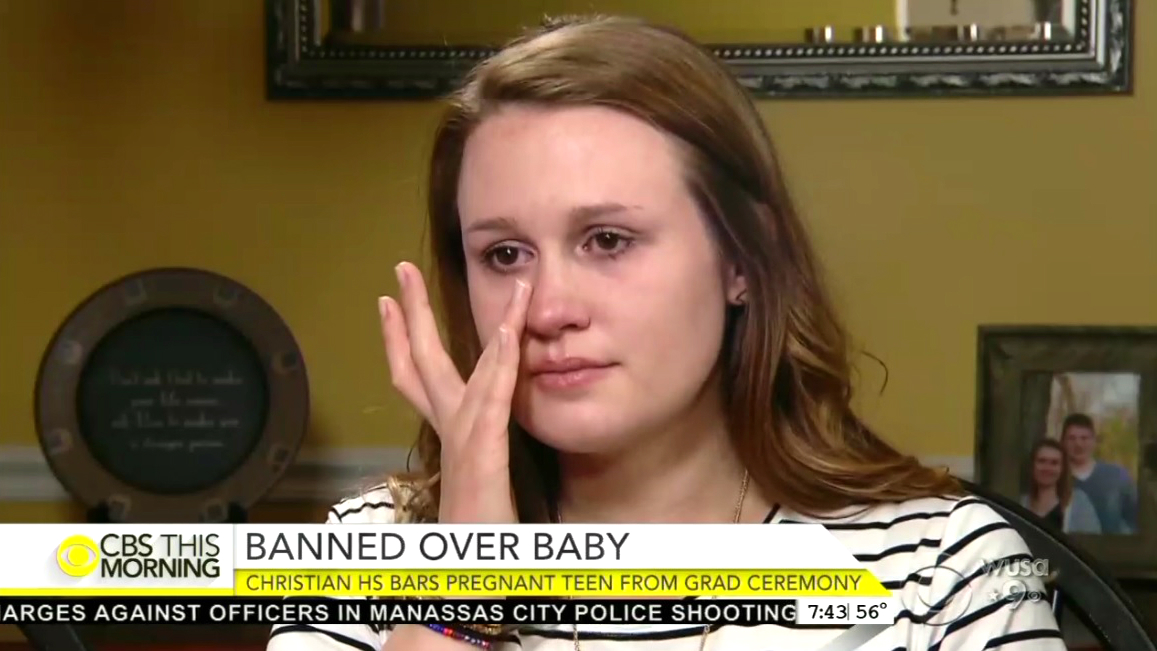 On Wednesday, CBS This Morning reported the story of high-school senior Maddi Runkles. Although Runkles boasts a 4.0 average and even served as student council president, she was banned from “walking” at graduation by Heritage Academy, a private Christian school in Maryland. That’s because, in January, Runkles discovered she was pregnant. While she considered abortion, she says, she “did the right thing” to keep her baby boy.

Co-anchor Gayle King introduced the 4-minute segment by contrasting Runkles’ school “defending its decision” with the “anti-abortion group” Students for Life advising that the “school should not punish this 18-year-old.” She turned to correspondent Jan Crawford for the full story.

“She admits she made a mistake,” Crawford said of the “model student.” “She says she considered having an abortion, but she decided against it. And now, she says, the punishment she’s facing isn’t fair.”

To prove her point, Crawford showed clips of her interviewing Runkles. “Did you think, ‘I could have an abortion?’” she asked the teenager.

“Definitely,” Runkles immediately responded. “You're taught that it's wrong and you know that it's wrong, but I never thought that I would consider it, but it was just the fear and what I’ve seen girls like me go through.”

While Runkles admits she broke the student code (by having premarital sex), she argued that the school treated her differently from other students that had done similarly. Yet, she stressed, she found her trial a “blessing.”

“I know at the end of the day that I made the right choice and in a couple of months I'll have this little sweet reward just to remind me that I did the right thing,” Runkles told Crawford, after showing her a nine week sonogram of her baby.

On the other side, Crawford interviewed Heritage Academy Principal Dave Hobbs. “We want her to be viewed as part of the Heritage family,” he argued, “but there's still accountability necessary.”

Crawford also interviewed Runkles’ mother, Sharon. Her father Scott, who led the Heritage school board before quitting over his daughter’s treatment, did not make an appearance.

At the end of her report, Crawford revealed that Runkles is expecting a baby boy in September. “Maddie said that she's planning to name him Grayson as a nod to God's grace and forgiveness,” she added.

On Saturday, Runkles began attracting national attention after The New York Times covered her story. But that wasn’t the first time she went public. After her family turned to Students for Life for help, Runkles shared the story of her unexpected pregnancy at a rally held in Washington, D.C.

On Tuesday, her principal released a statement on behalf of the school. Among other things, Hobbs argued that “Maddi is being disciplined, not because she’s pregnant, but because she was immoral.”

As president of Students for Life, Kristan Hawkins responded to Hobbs. Hawkins wrote, in part:

Disciplining Maddi is not the issue … [M]y primary and continued complaint is that the disciplinary actions of the administration has extended far beyond accountability for the broken pledge regarding premarital sex. That accountability was served justly and humbly in Maddi’s confession, her suspension, and her removal from leadership positions …

By banning her and her alone, the administration and board collectively decided to make a public example of one student and has either intentionally or unintentionally communicated to the school community that pregnancy (not simply premarital sex) is a shame and should not be observed within our school community.

Autumn Lindsey, a pro-life teenager from Washington who has worked with Students for Life before, also published a video defending Runkles.

“When Christian schools respond like this they are promoting abortion,” she urged. “How many countless girls have been too afraid to ask for help and end up aborting their baby?”