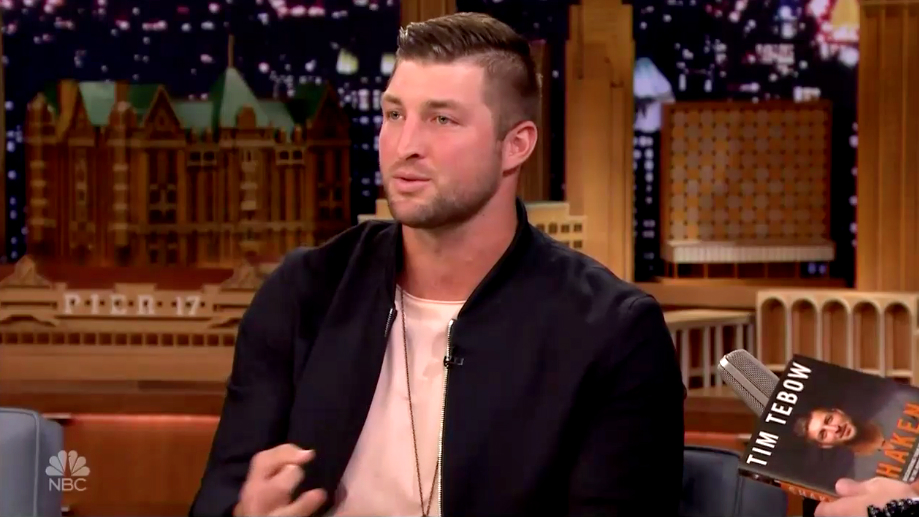 As sports evolves into a new political battleground, one star is standing out by making the world a better place. And, he’ll readily tell you, the credit goes to God.

On Wednesday, former Heisman Trophy winner and NFL quarterback Tim Tebow appeared on The Tonight Show to talk about his new career as a minor league baseball player as well as his book Know Who You Are. Live Life Like It Matters. And, together with host Jimmy Fallon, he pulled off a prom dance to surprise one “amazing” girl with special needs.

Tebow hoped his second book, published Tuesday, would inspire readers to live life to the fullest:

I just want to encourage people. I want people to know how much they matter. How important they are. How they have purpose in this life. And, yeah, we're going to get knocked down, but your identity can be bigger than just your circumstances. So, I want to encourage people, especially young people that when they pick up the book they can read it and they can know that it's not just about how many followers you have on Instagram. It's not, you know, about what's happening at your school – are you the most popular? But you are loved by the God of this universe. You are special, you are important. And you matter.

Besides admiring the book, Fallon admitted he was also “so impressed” by Tebow’s charity work through his Tim Tebow Foundation. Among other things, the foundation hosts an annual event, Night to Shine, which Tebow described as a “worldwide prom for people with special needs.”

“Kids with special needs are being celebrated. They're walking down red carpets. They're being cheered for,” Tebow stressed. “And it's my favorite night of the year.”

Together with Fallon, Tebow made a piece of that night come to life on the show. “There's actually a special girl here in the audience, that went to Night to Shine here in New York,” Tebow revealed. “And she is so amazing, she is so inspirational.”

“And she actually reached out to me and invited me to prom,” Tebow continued, although he couldn’t attend because he was busy “flying all over the world, going to a lot of them.”

But he hoped that he could make up for his absence. “He invited her mom here today. And she is here. And I am here. And, So, Judy Adams, I was wondering if maybe I could have a dance?” he asked.

As he handed her a corsage, her mother started tearing up. “You look beautiful,” he told the excited girl, as he began dancing with her.

For another inside look at the event, Tebow’s foundation posted a highlight reel of the 2017 prom night on YouTube.