While the broadcast networks are (finally) covering nationwide pro-life rallies against Planned Parenthood, they still have a long way to go: not one reported on the struggle between counter-protesters and police as they guarded the pro-life marchers in Washington, D.C. last weekend. 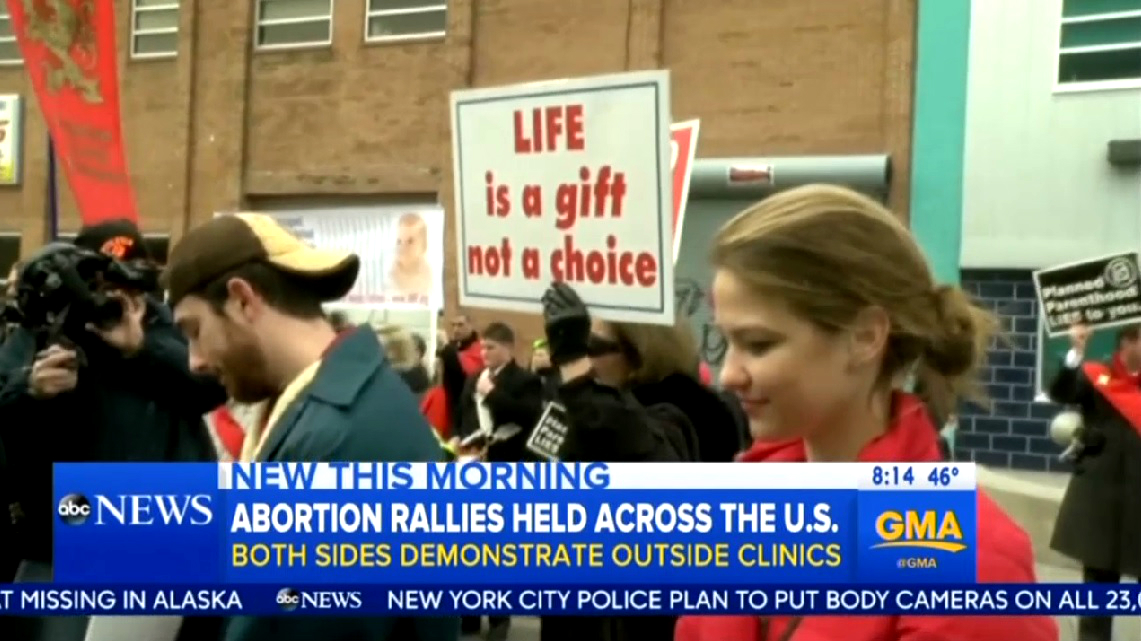 “#ProtestPP,” a coalition of pro-life groups, began organizing national days of protest in 2015 to call for the defunding of Planned Parenthood after the Center for Medical Progress videos exposed the abortion giant’s practice of harvesting aborted baby parts. The latest rally on Saturday, Feb. 11, boasted 228 rallies in 45 states. In response, supporters of America’s largest abortion provider, Planned Parenthood, organized counter-protests in the same locations at the same time.

Although they haven’t covered #ProtestPP rallies in the past, ABC, CBS and NBC covered the most recent one Saturday. But while the networks recognized both Planned Parenthood activists and pro-lifers in their morning or evening news shows, they failed to air footage shedding a negative light on counter-protesters, such as when they confronted police escorting pro-life marchers in Washington, D.C.

As #ProtestPP participants marched from the Supreme Court to the Washington, D.C. Planned Parenthood, abortion activists tried to block them at each street crossing:

At different points, police had to use physical force to push the counter-protesters away from the pro-lifers:

Rev. Patrick Mahoney, Christian Defense Coalition director, captured the whole D.C. march on camera in a public Facebook live video. Among other things, his video showed screaming Planned Parenthood supporters blocking the pro-life march multiple times by linking arms and kneeling in the street while also physically struggling with police. The counter-protesters also called pro-lifer marchers “bigots” and chanted “you don’t care if women die!”  – on top of other vulgar language (“f*ck you”) directed at police. Watch the highlights below.

“It’s so funny that people are calling us ‘bigots’ and ‘intolerant' and they’re blocking our way," Rev. Mahoney commented at one point.

While ABC and CBS displayed footage from the Washington, D.C. rally, they still didn’t show the struggle between police and Planned Parenthood activists.

During the CBS Weekend News Saturday evening, anchor Reena Ninan introduced the segment on “demonstrations on both sides of the Planned Parenthood funding debate.” Correspondent Tony Dokoupil continued the report on “dueling rallies” between supporters of abortion and the “opposition to a woman’s right to abortion” or “abortion-rights opponents.”

“The bulk of what Planned Parenthood does at clinics like this one all across the country is provide basic health care, but, Reena,” he defended in his conclusion, “demonstrators say they won't stop until the number of abortions the group provides falls to zero.” CBS Sunday Morning also mentioned the protests, without showing any conflict.

During ABC’s Good Morning America on Feb. 12, reporter Ron Claiborne also noted the “demonstrations on both sides of the abortion issue,” and included (peaceful) footage from Washington, D.C.

Besides ABC and CBS, NBC Nightly News anchor Jose Diaz-Balart also noted that “thousands showed up for protests and counter-protests” on Feb. 11. Correspondent Morgan Radford continued the segment on “anti-abortion demonstrators” versus the “abortion-rights activists.” On Feb. 12, during Today, there was also a brief reference to protests against "repealing Obamacare and abortion rights."

Like ABC and CBS, NBC didn't even hint at the conflict between police and Planned Parenthood supporters.