Some things are unstoppable – even in the face of a blizzard.

Friday’s 2016 March for Life took place in Washington, D.C. on the 43rd anniversary of Roe v. Wade, the Supreme Court decision that legalized abortion. But The Washington Post described what it called “thousands” of Americans marching together for the nearly 60 million babies destroyed by abortion as “small.” That report sparked an outcry from pro-life organizations. 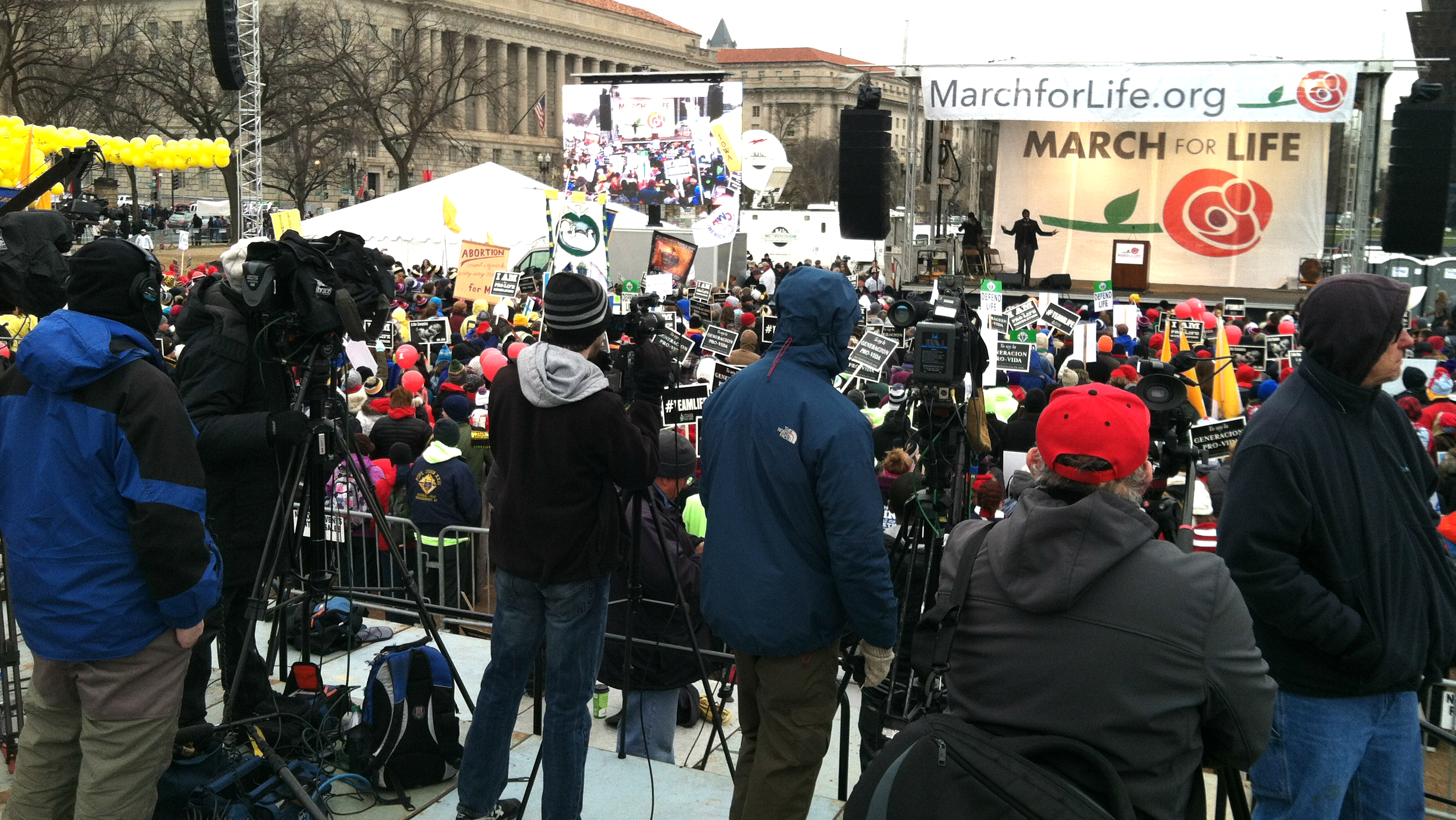 Not only is the Post wrong, it’s even wrong by its own standards.

There were fewer participants than years past, but tens of thousands still attended the march, according to March for Life organizers.

“We were extremely pleased with what appeared to be tens of thousands of Americans who came together to celebrate life today despite the weather conditions,” said Jeanne Mancini, President of the March for Life Education and Defense Fund, in a statement to MRC Culture.

But The Washington Post didn’t reflect or even mention those numbers in reports like the one written by D.C. reporter Michelle Boorstein.

The Post headline for her story read, “As DC shuts down for a blizzard, a small, faithful crowd still joins the March for Life.” Smaller, certainly. Small? Not a chance.” 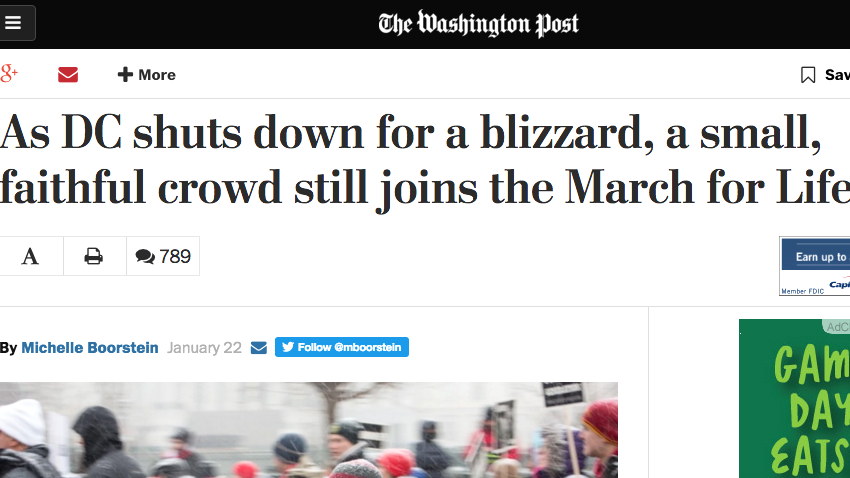 While Boorstein found the event “inspiring,” she highlighted the “much-reduced size” and the “dramatically smaller” crowds that she estimated to be “in the thousands.”

Here are other examples of protests or gatherings the Washington Post deems “small”:

None of those events had tens of thousands – or even thousands – of attendees. In fact, only one had definitively more than 100.

When “more than 100 activists” protested the Redskins’ name at FedEx Field in 2014, the Post didn’t even call that small. Instead, D.C. Post reporter John Woodrow Cox wrote that “it represented the largest protest of the name that took place at a home game.” Of course, the Post is wildly against the Redskin team name. In 2013, MRC Culture found the Post spent 32,000 words against the Redskins.

Nor did D.C. reporter Joe Heim call “a hundred or so demonstrators” “small” for the Post when they gathered at the White House to protest deportation raids at the end of last year. Again, the protesters were pushing a liberal agenda. So they weren’t small. 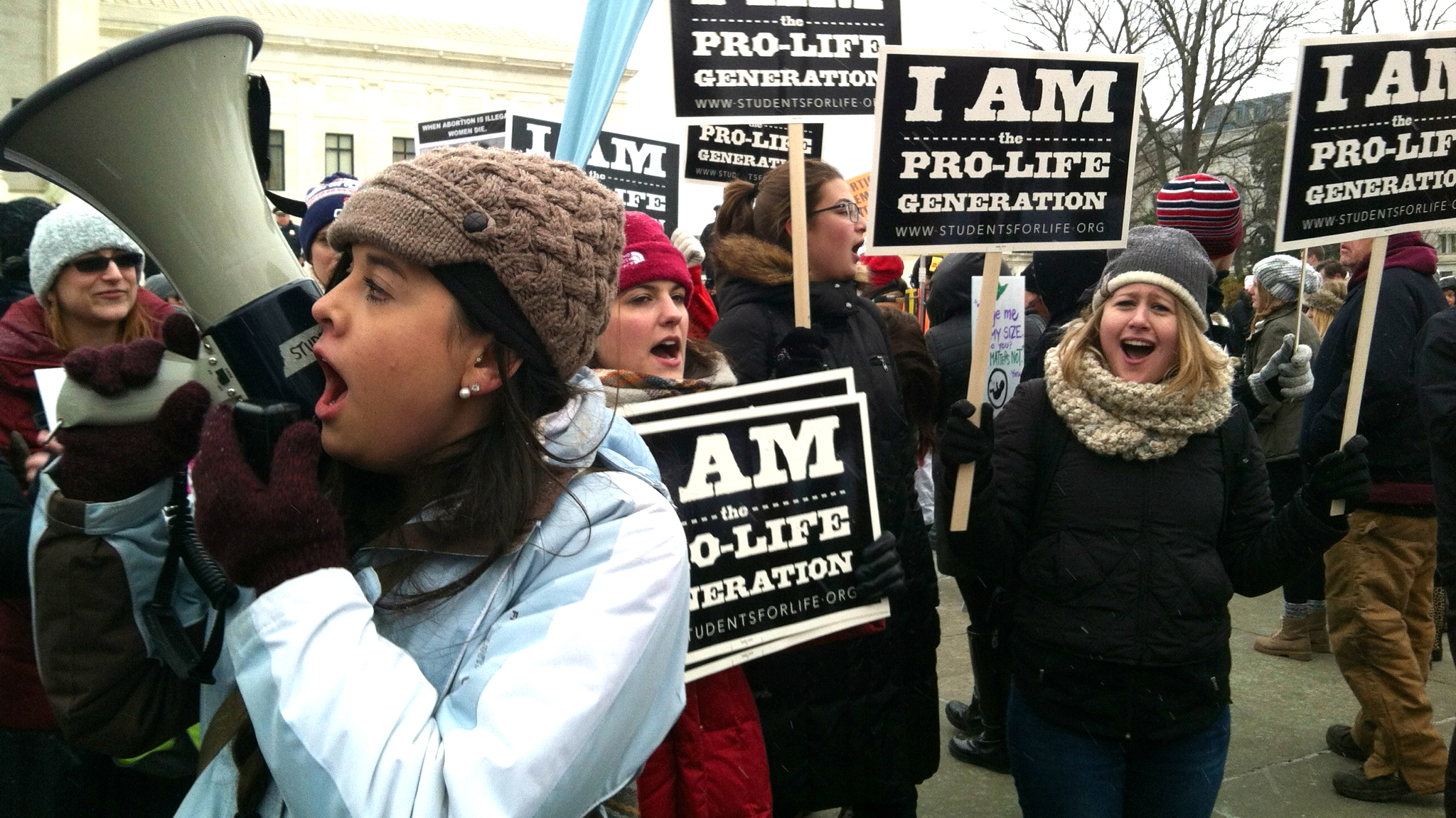 But back to Boorstein, who originally reported on the march. You know what else she has defined as “small” besides the 2016 March for Life? A gathering of 60 people.

At the end of April last year, Boorstein reported a “small, unusual congregation that met in Bethel AME Church’s grand sanctuary” in Baltimore for a “service and meeting of about 60 people” following Freddie Gray’s death.

In 2011, Boorstein contributed to a Post report on a “small, quiet protest” against House Speaker John Boehner consisting of a Catholic University graduate and “about 30 other students.”

But the Post headline for Boorstein’s March for Life report (in which Boorstein conceded thousands attended unlike the events above) still read “small.”

Love the annual complete propaganda that "the media" doesn't cover the March for Life. The @washingtonpost is always there #fundraising

Apparently she hasn’t yet read how the networks covered the National Zoo’s panda cub debut 26 times more than the March for Life this year.