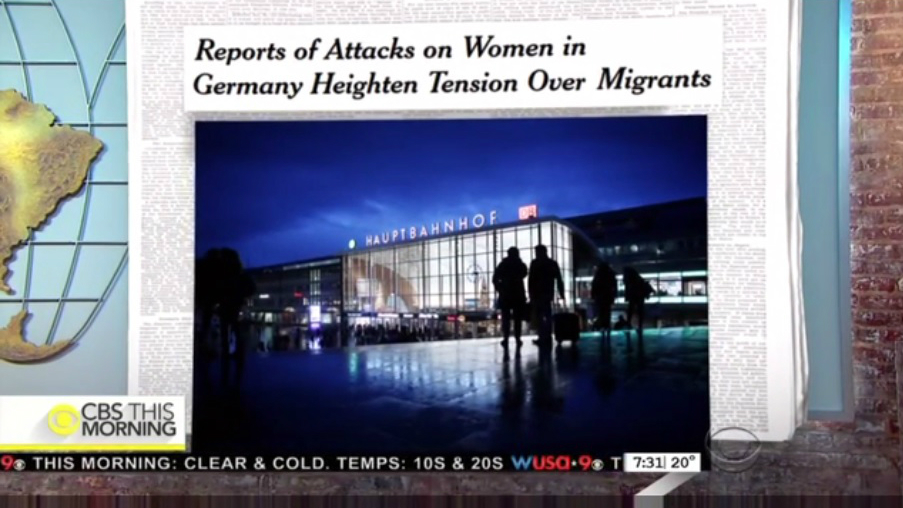 It’s called a double-standard. While media have happily hyped the political “War on Women,” two networks won’t say a word about the shocking story of women assaulted by migrants.

During their broadcast morning and evening news shows, both ABC and NBC turned a blind-eye to a New Year’s Eve story of 1,000 migrant men who allegedly gathered outside Cologne’s main train station to sexually assault, rob and even rape female passers-by.

A new Associated Press report announced that 121 women have now filed criminal complaints, including two cases of rape. The men, according to police, were of "Arab or North African origin.”

The only mention of the story from a broadcast news show came from CBS, during This Morning, Jan. 6.

Co-host Charlie Rose summarized an article from the New York Times on the “outrage in Germany after gangs allegedly assaulted women in Cologne on New Year’s Eve.”

“The suspects appeared to be North African Arabs,” he continued. “This comes amid tensions over the huge influx of migrants into Germany.”

With the CBS report, ABC and NBC can’t claim that the story out of Germany isn’t newsworthy. Media outlets including The Washington Post, The New York Times, and The Wall Street Journal also wrote on it.

According to BBC, the networks could be telling stories like these from the victims:

Instead, they stay silent.